Firefighters arrived on the scene and quickly struck a second alarm.
WPVI
By 6abc Digital Staff and Alyana Gomez 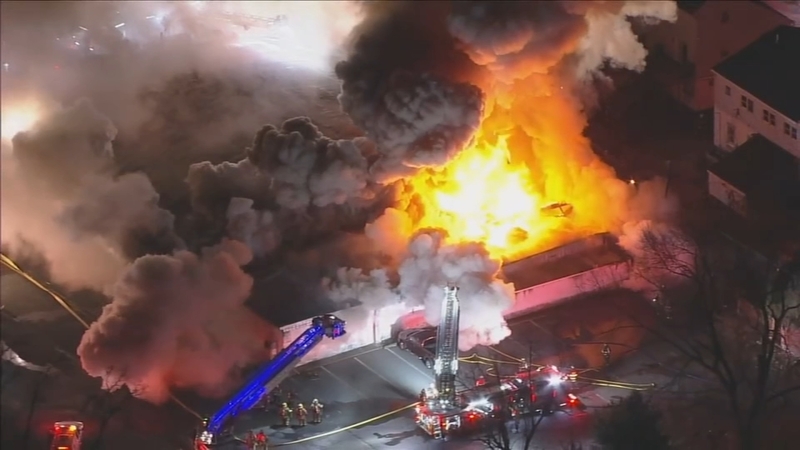 The fire started around 5:15 a.m. in a shed behind Levittown Lanes on the 8800 block of New Falls Road. It soon consumed the entire bowling alley.

A loss for the Levittown community, firefighters are working to extinguish the 3-alarm fire here at Levittown Lanes. @6abc

Thick smoke is billowing out of the building, officials say the fire is threatening neighboring properties. pic.twitter.com/PJ2i3Fke1G

Firefighters arrived on the scene and quickly struck a second alarm. The fire reached three alarms around 6:20 a.m.

"When I pulled up, there was obvious fire in the rear, in the shed, and it looked like a connected storage unit that the bowling alley uses to store their supplies," Falls Township Deputy Fire Chief Drew Zeek said.

Chopper 6 was over the scene as a portion of the roof caved in.

"It was one of those moments where it was like 'oh no,' and then the flames started shooting up in the air as the roof collapsed; it was a giant plume of flames going up in the air," Levittown resident Tom Krawiec said.

The sound of sirens woke up neighbors nearby who watched as the community staple was torched by flames.

"It's been around since probably the early 50s when Levittown was built," Krawiec said. "We had our kids birthday parties in there when they were 5 and 6 years old."

Crews remained on the scene past noon to make sure the fire was under control.

"We never want to see a loss like this, but we had to write this one off and wait for it to burn through for us to extinguish," Zeek said.

The cause of the fire has not been determined. There have been no reports of injuries.