"There's no regard for human life. Whoever did this should be held accountable," said one resident
WPVI
By George Solis 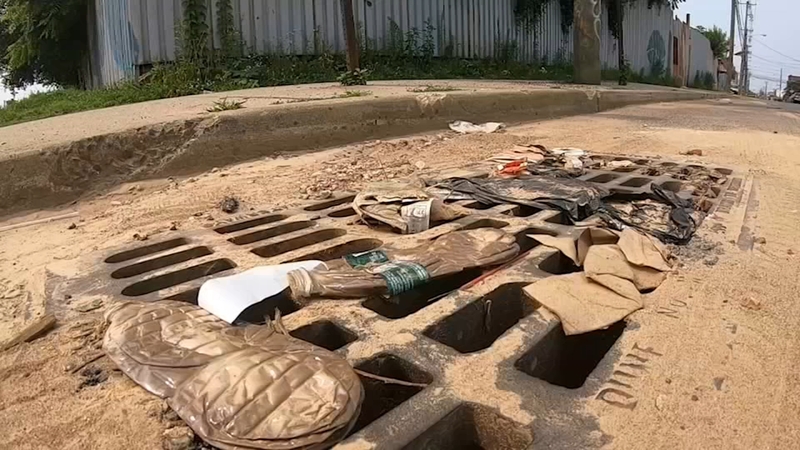 CAMDEN, New Jersey (WPVI) -- The living conditions have worsened for some Camden, New Jersey residents who live near an illegal dumpsite.

The debris has begun to spill onto sidewalks and properties in their neighborhood, and many are now fearful for their safety.

Locked behind a creaking gate and narrow walkway lies a treacherous terrain made up of rock, dirt, and old construction debris that homeowner Carlton Soudan once called his backyard.

Fears of a potential landslide are growing as the sludge slithers down sidewalks. All the runoff has been tested by the Department of Environmental Protection and confirmed to be riddled with contaminants known to cause cancer.

"On hot days this soil travels in the air," Soudan said.

The Price Rite on Mount Ephraim Avenue in Camden abruptly closed recently. It's the biggest grocery store in the city.

The source of it all has been towering over his property for years.

While efforts to stop and fix the illegal dumping are ongoing, those both directly impacted and even adjacent to the site are outraged it was allowed to continue unchecked for so long.

"There's no regard for human life, that's what I see. Whoever did this should be held accountable," said resident Lenora Carpenter.

Recently, both New Jersey's top law enforcement and environmental agencies teamed up to go after the current and former property owners they claim are responsible for the illegal dumping.

A looming legal battle is now on the horizon. Officials in Camden shut down the site in April. The new administration declared this long-standing problem one they intend to correct.

"This has been an environmental injustice and we're just not going to be dealing with illegal dumping," said Mayor Victor Carstarphen.

"This is crazy, I don't even understand this," Soudan said. He invites anyone that doubts the danger to see it firsthand.

Some groups have tried to clean the site themselves, but it clearly hasn't been enough.

Action News reached out to the property owners but we have not heard back.