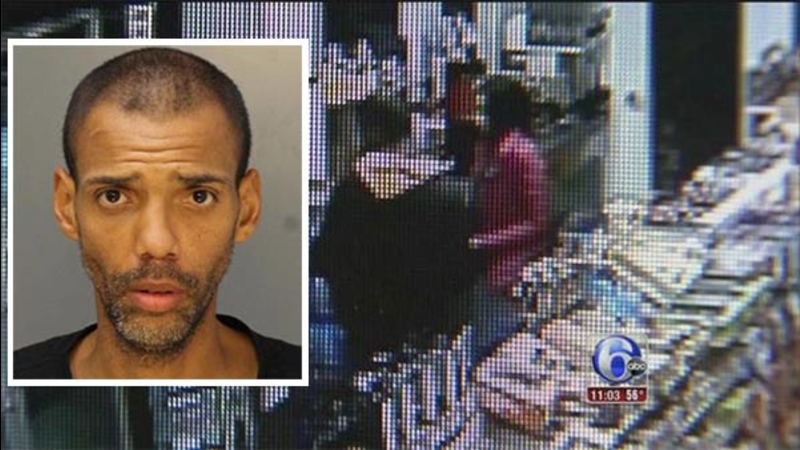 CENTER CITY (WPVI) -- Police have arrested and charged a man who allegedly abducted and robbed a Center City doctor.

Nathaniel Rodriguez, 40, is the man police say was captured on surveillance video with the doctor inside a Port Richmond gas station as he tried to get her to withdraw money from the ATM on Wednesday morning.

Employee Manveer Komer was working the overnight shift and immediately suspected something was wrong.

"I was looking. This is not a boyfriend, not a girlfriend," said Komer.

He was right to be suspicious.

Earlier in the morning, around 6 a.m., police say, Rodriguez had abducted the doctor from a parking garage at 8th and Delancey streets across from Pennsylvania Hospital.

She had been on the phone with her husband when Rodriguez got on the elevator with her.

She told police he flashed what appeared to be a gun and forced her into her car.

They drove around in her Honda Fit to ATMs until her debit card was declined for exceeding the limit.

The woman's husband, suspicious when his wife's phone went dead, went to the hospital and alerted police.

Along the way, Rodriguez allegedly picked up a friend.

After trying the ATM at the Port Richmond Exxon on York Street and Aramingo Avenue, the suspect and victim bought cigarettes using her credit card.

By now, Komer was convinced he needed to help the woman. As she went to leave with the suspect, Komer told her he would keep her safe and to stay inside.

Outside, he yelled to the Rodriguez to give back the woman's keys and phone.

Komer said the man acted as if he had a gun and drove off in the victim's car, but the doctor was safe. Komer gave her a bottle of water and they called police.

Meanwhile, Rodriguez turned on the victim's phone, allowing her husband to track it.

Police caught up with the car and the two men inside were arrested.

Action News is told the second man who was picked up along the way is not likely to face any charges.

Police say Rodriguez is a known drifter and has previously been arrested for a theft inside Pennsylvania Hospital last week.