Police say the woman forgot to put the vehicle in park when she was getting out and got stuck underneath.
WPVI
By Gray Hall 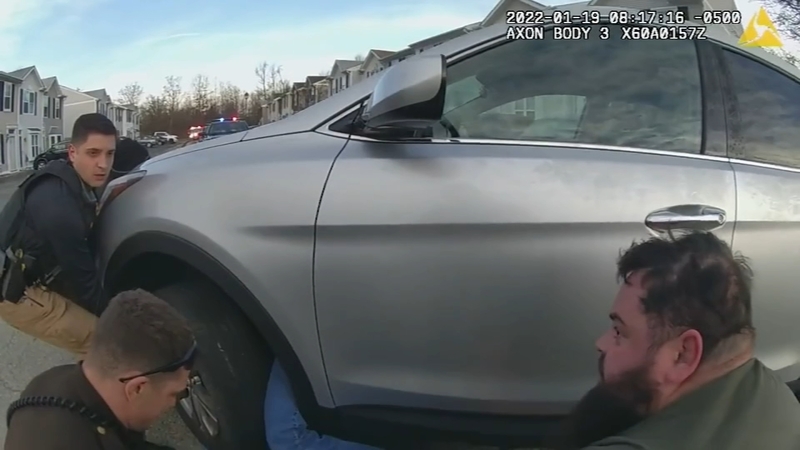 NEWARK, Delaware (WPVI) -- Police officers in Delaware and a good Samaritan teamed up to rescue a 70-year-old woman who became trapped under an SUV earlier this week in Newark.

The incident was captured on body cam video.

"I have been on six years and I can honestly say that this is the first time I have had to do something like this," said Officer Lewis Echevarria with the New Castle County Police Department.

Police say the 70-year-old woman forgot to put the vehicle in park when she was getting out and got stuck underneath.

When officers arrived, her leg was in the wheel well and her arm was pinned under the tire.

"She was just frantic. I was trying to calm her down. I told her she was going to be fine. Once EMS got there she was in good hands," said Officer Nicholas Manucci, who was first on the scene.

He says his fellow officers quickly jumped into action, lifted the car and pulled the 70-year-old woman to safety.

"These guys did the heavy lifting, and once the car came up I dragged the elderly woman out to safety," says Manucci.

Before officers arrived, neighbor Kyle Stant was on the scene.

He tried to use a jack to free the woman.

"The jack was not big enough to lift her car. At that moment five county cops show up. I tell them 'I need your help' and myself and four county cops we lift the car. The fifth cop pulls her out," said Stant.

Stant says he tried to stay calm and keep his neighbor calm.

The New Castle County police chief is praising the quick thinking of Stant and his officers. He says their teamwork likely saved this woman's life.

"She was behind the front left tire where I found her laying, and I did everything in my power to get her and to make sure she was safe and nothing else worse would happen," said Stant.

It's safe to say the victim is thankful for great neighbors and good police work.

"Situations like this remind us how when police, fire, paramedics and the community work together, amazing things can be accomplished," said Colonel Joesph Bloch, Chief of the New Castle County Police Department.