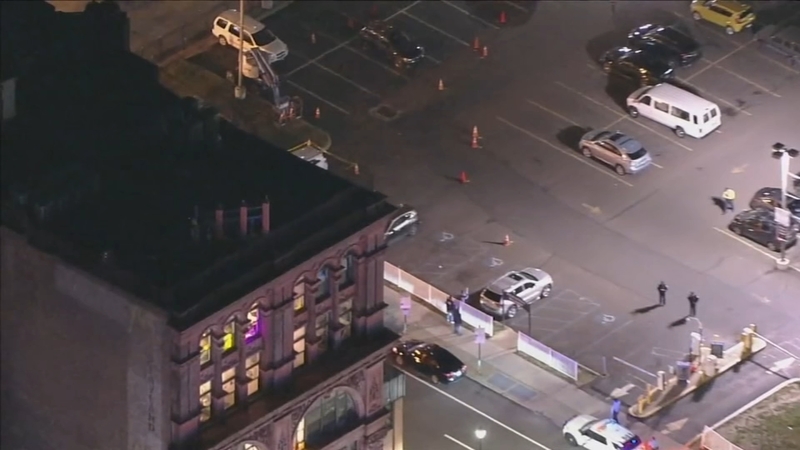 PHILADELPHIA (WPVI) -- A beautiful night in Center City Philadelphia was shattered by the sound of gunshots that echoed through the skyscrapers Friday.

People scattered, and when the gunfire ended, a 17-year-old had been reported shot.

Police say a group of young men between the ages of 16 and 20 was running from a parking garage around 7:15 p.m. near 8th and Market streets.

"Not sure yet what was happening, but what we know there was a group of kids running through this parking lot west to east as the shots were heard from numerous people," said Captain Johnny Walker of the Philadelphia Police Shooting Response Team.

Officials say a Philadelphia parking enforcement officer was passing through the area.

Moments later, the officer found the 17-year-old male victim hiding in a parking garage near 8th and Chestnut streets.

"He was very scared. I said, 'You alright?' And he said, 'I'm shot. I need help, please.' He said, 'Officer, I've been shot. Can you help me, please?' I said, 'Yes, I can relax, calm down," said parking enforcement officer Vernon Hill.

The victim was taken to Jefferson University Hospital with a gunshot wound to the right foot. He is said to be in stable condition.

The shooting was one of several that happened across the city Friday.

But this one happened in the heart of Center City, bustling with tourists and people enjoying a night out.

"It creates darkness in the city. That's the biggest part. The economic impact also hurts, so we need to get a hold of this, and again, we're going to work hard to continue to push forward," said Walker.

Police are praising the parking enforcement officer for coming to the aid of the victim.