A timeline of the deadly weekend in Charlottesville, Virginia 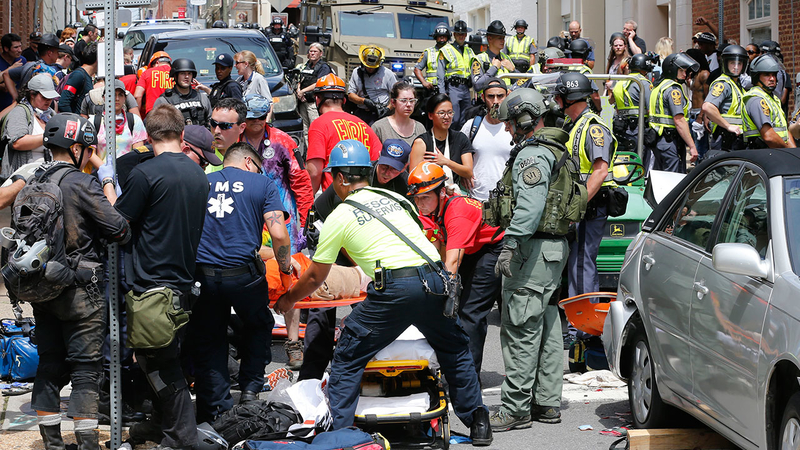 Timeline of the deadly weekend in Charlottesville

CHARLOTTESVILLE, Va. -- This weekend marks one year since the white nationalist rally in Charlottesville, Virginia, when 32-year-old counter protester Heather Heyer was killed.

Here is a timeline of events leading up to and surrounding the violence.

Several groups and individuals filed a lawsuit against the Charlottesville City Council. They said that the removal would violate the terms of the statue's donor and that it would go against laws surrounding war statues.

A group protesting the removal of the statue gathered, carrying torches, in what was then called Robert E. Lee Park, where the statue is located. They were met by counter-protesters.

A plaque is removed from in front of the Robert E. Lee statue.

The plaque before the Robert E. Lee statue celebrating “Lost Cause” and “Confederate Heroes” is GONE, as of today. https://t.co/n2V18XnxAH

Virginia Governor Terry McAuliffe released a statement about planned security for the "Unite the Right" white nationalist rally, which was planned in part to protest the removal of the statue. He said that participants had the right to exercise their freedom of speech, but that he found their views "abhorrent." He urged demonstrators of every view point to make alternative plans.

Below is Governor McAuliffe's statement on the planned rally in Charlottesville, VA on Saturday, August 12th: pic.twitter.com/0TbGoCEP3w

Friday evening
After the city of Charlottesville had lobbied for a change in venue due to the size of the event, a judge ruled that the event could remain in Emancipation Park as planned.

Hundreds of white nationalists, some wielding torches, gathered at the University of Virginia ahead of Saturday's larger rally. Their chants included phrases such as "white lives matter," "you will not replace us," and the Nazi-associated phrase "blood and soil." The mayor of Charlottesville called it a "cowardly parade of hatred, bigotry, racism, and intolerance."

Approx. 8:30 a.m.
Demonstrators begin gathering at least three and a half hours before the event is scheduled to start.

Approx. 10:30 a.m.
Violence breaks out between protesters and counter-protesters. Virginia Police say there are two people who have injuries that are "serious but not life-threatening."

11:35 a.m.
The event is declared an unlawful assembly by law enforcement.

11:52 a.m.
After the violence pours out into the streets of Charlottesville, Gov. McAuliffe declares a state of emergency.

We ALL must be united & condemn all that hate stands for. There is no place for this kind of violence in America. Lets come together as one!

Approx. 1:40 p.m.
A car plows into a crowd of people. One counter-protester, 32-year-old Heather Heyer, is killed. At least 19 other people were sent to the hospital.

President Trump addressed the nation, condemning the violence "on many sides" and saying "We must love each other, respect each other and cherish our history and our future together."

We will continue to follow developments in Charlottesville, and will provide whatever assistance is needed. We are ready, willing and able. pic.twitter.com/mCTYBgUePi

The president's remarks were met with criticism from both sides, with many calling for Trump to call out and condemn the white nationalists groups by name.

Very important for the nation to hear @potus describe events in #Charlottesville for what they are, a terror attack by #whitesupremacists

Two policemen were killed when their helicopter crashed as they were responding to the day's events. They were identified as Lt. H. Jay Cullen and Trooper-Pilot Berke M.M. Bates.

Police announce an arrest in the car-ramming incident, 20-year-old James Alex Fields, Jr. from Ohio. He was charged with second-degree murder.

"The president said very strongly in his statement yesterday that he condemns all forms of violence, bigotry and hatred," the statement reads, "and of course that includes white supremacists, KKK, neo-Nazi and all extremist groups. He called for national unity and bringing all Americans together."

Solidarity events took place around the country on Sunday, and more are planned for Monday. Democratic group Indivisible told Vox that nearly 700 such events have already been planned.

The president again addressed the violence, restating parts of his original statement without using the words "on many, many sides." This time he listed neo-Nazis and the KKK by name in his condemnation.

POTUS: "Racism is evil and those who cause violence in its name are criminals and thugs, including the KKK, neo-Nazis, white supremacists" pic.twitter.com/O6jO7sIkKH