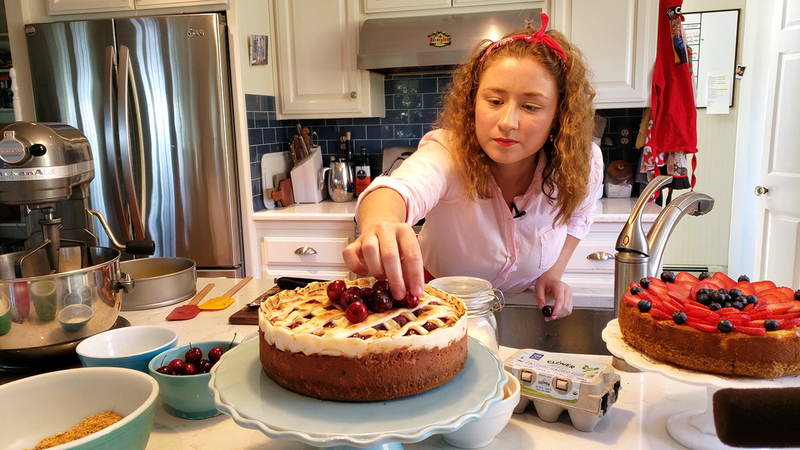 Paying for college one cheesecake at a time

HEALDSBURG, Calif. -- Anamaria Morales is all about cheesecake.

Her love for cheesecakes began nearly four years ago. It was a life-changing moment.

"I made a cheesecake for Christmas and it was the first cheesecake I had ever made,"

It was a hit. Her mom took some to work and a co-worker liked it so much she wanted the recipe.

"Anamaria said, 'No, I'm not giving her the recipe.' She said, 'I will make her one and sell it to her," recalled Laura Morales, Anamaria's mother.

Laura's co-worker paid $40 for the cheesecake and that got Anamaria thinking.

"And a light went off and it was like, 'I am going to start selling cheesecakes.'"

That light went off at a painful time for Anamaria. She was about to graduate from El Molino High School in Sebastopol and college tuition weighed heavily on her mind.

"She wanted to make sure that the financial burden was not on us," remembers Tomas Morales, Anamaria's father. "When she decided after her senior year, college for sure, we were supportive. Financially we weren't able to do it."

Anamaria's mom remembers the decision vividly. "It was a big decision. She cried a lot. It was really hard for her."

Anamaria decided to hold off on attending a four-year university because she did not want to accumulate debt or have her parents take on that burden. So she enrolled at Santa Rosa Junior College. She began making cheesecakes with a determination to raise enough money to pay for a university education.

"I made a Facebook post," said Anamaria. "And I wrote, 'I am going to be making my New York style cheesecake for $40 per cheesecake. All of the proceeds go towards college. Just message me if you are interested.' And by the first month, I had one order every single day."

She called herself the College Confectionista. That New York style cheesecake was transformed into a Sonoma County style cheesecake. Just one of many flavors she promotes each month.

"Lemon Love is my favorite. That's during February when the Meyer lemons are in season. Depending on what fresh produce is in season I make different cheesecakes. It is cherry season so I have cherry pie cheesecake."

"She would put herself out there and let people know, 'I am trying to raise money to go to college'.' Everyone wanted to pitch in," said Tomas.

Among those pitching in are David and Carol Noack. They give her Meyer lemons.

"We always have an over-abundance of lemons every year and they are very sweet. She just called us up and asked if she could have them and we were just thrilled that she wanted them because we wanted to support her," said Carol.

She gets eggs from her grandmother and fruit from local farms. A local vendor lets her use a commercial kitchen for large orders.

"The most cheesecakes I have single-handedly made are about 324 for Christmas," said Anamaria proudly. She makes each cheesecake to order, which means big orders near the holidays keep her very busy.

All that hard work has paid off in a big way. She has raised enough money to pay for her classes and books at Santa Rosa Junior College and now has enough funds saved to pay for her college tuition at U.C. Berkeley, where she will start in the fall as a business major.

"And I will be going to college completely debt free, which was my goal. Thank you to the cheesecake," said Anamaria.

She plans to keep making cheesecakes during her college breaks. And she has big plans for her business. She wants to expand College Confectionista into a non-profit to help other young people sell cheesecakes to fund their college education.