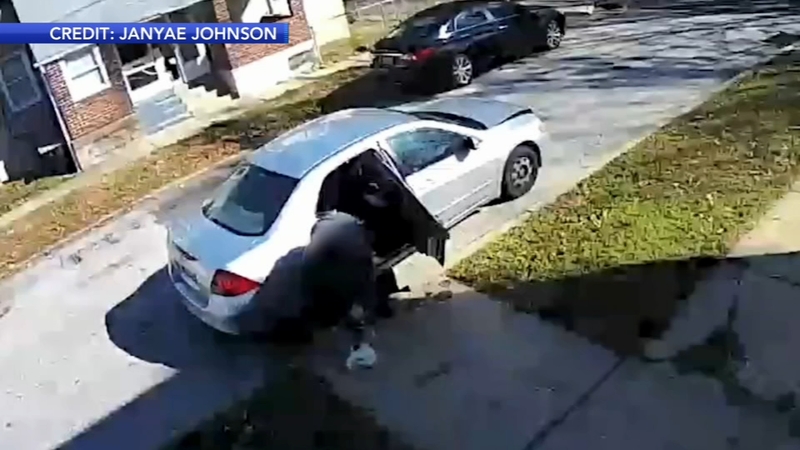 CHESTER, Pennsylvania (WPVI) -- An investigation is underway into possible dognappings in Chester, Pennsylvania over the past month. Surveillance cameras captured one of the alleged thefts involving a Maltese mix, scooped up right outside the owner's home.

"Boom he took her that easy that quick, she fought though," said owner Janyae Johnson.

Johnson was stunned as she watched the video of it all unfolding in front of her home back on November 6 in the 900 block of Terrill Street.

Daily searches have yielded no info. She's now taking her case directly to the man seen on video.

"I'm not mad if you thought she was a stray, you see on her neck she's not a stray cause you see her tag she's been in our family for 10 years. Just bring her back, just give her back, drop her off something. I want my dog back," she said.

She's not the only dog owner searching for a stolen dog.

About four miles from the most recent reported dog theft, Angela Lassiter, who lives in 1100 block of Meadow Lane, claims her black chihuahua, "Babygirl" was stolen from her yard back on Halloween.

She put up fliers anywhere she can.

"We've been riding around, going through alleys, walking around. I've been searching like every day," she said.

Word of this most recent reported dog theft caught on video has made its way around the community.

"I just wish they would bring the dogs back, stop stealing peoples' dogs like it don't make no sense," said neighbor Shirley Starling.

Lassiter is hoping the crimes aren't connected and is also issuing a plea to whoever has her dog.

"My mom passed earlier this year so she's really been a lot of support for me," Lassiter said.

Johnson says she is offering a reward for her dog's safe return.

"I got a picture of her on the door so when people see her. I moved here in 2014 and we ain't never had this problem," said Shirley Starling.