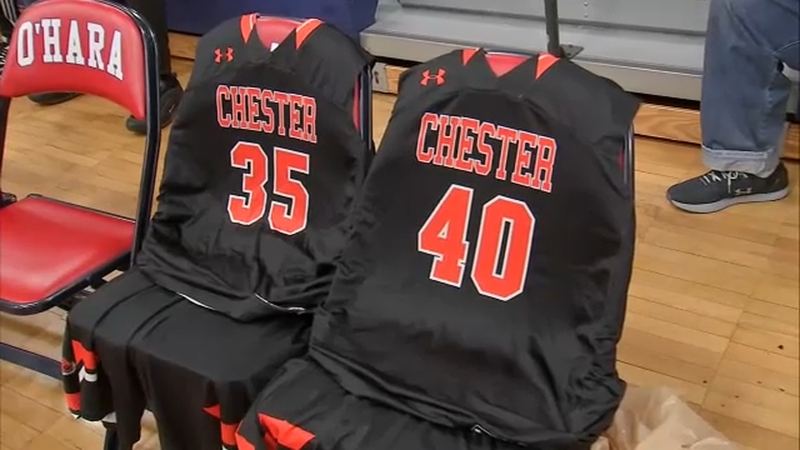 Gunman wanted after 2 teens killed in quadruple shooting in Chester

Police say two additional juveniles were injured in the shooting. One victim was transported to an area hospital and is listed in serious condition. Another victim walked into the hospital suffering from a gunshot wound to the torso and is expected to survive.

Harmon and another injured juvenile were supposed to play with their basketball team against Simon Gratz on Wednesday night.

"The boys were playing basketball at this court right here and someone either ran up or a drive-by and shot the boys up," said Harmon's grandmother, Lisa Brooks.

Harmon's other grandma wanted to let everyone know he was special.

"He was a good son, good in school. There is nothing anyone can say negative about him. He was taught right from wrong," Pastor Mary Thomas said.

Before the game, there was a moment of silence for the victims.

School officials say the team is struggling but chose to play Tuesday to honor their friends.

"Unfortunately, where we live, this is not a new occasion and we have too much practice at this. Yesterday they came together as a team and as a squad and young people who are in pain," said Dr. Jaun Baughn, Chester Upland School's superintendent.

Chester High School won the game on a last-second buzzer-beater to advance to the next round.

Anyone with any information on the shooting is asked to call the Chester Police Department.
Report a correction or typo
Related topics:
delaware countycrimeshooting
Copyright © 2021 WPVI-TV. All Rights Reserved.
TOP STORIES
Frontier Airlines: 'We are supporting' crew who restrained passenger
"Hands are tied" dealing with teens at NJ shore, police captain says
New details revealed in crash that killed 4 family members
Man dies after shooting in parking lot of gentlemen's club
450,000 bees found inside walls of Montco home
Simone Biles reveals aunt died suddenly 2 days before competition
CVS will raise its minimum wage to $15 an hour
Show More
Governors in NJ, Pa. call on Cuomo to resign: 'We are appalled'
Not all of MLK Drive reopening to traffic; closures remain for years
School board: Teachers, staff must be vaccinated or get tested weekly
AccuWeather: Some sun inland today, showers at the shore
2 injured in Conshohocken incident
More TOP STORIES News