Coatesville HS golfer gets hole in one - twice 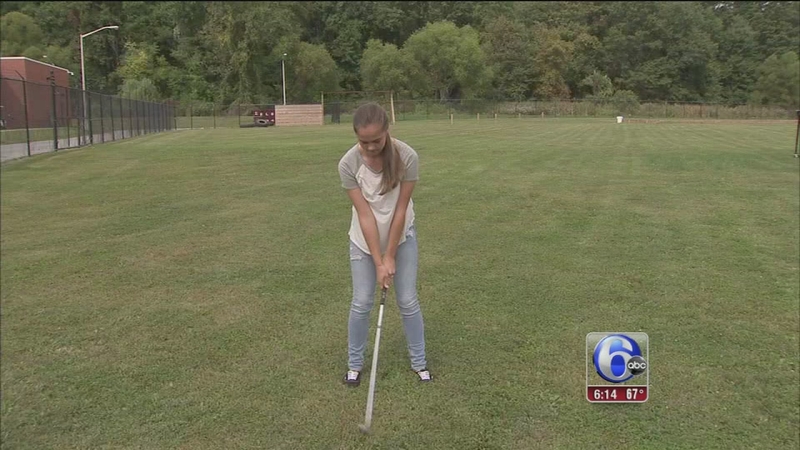 VIDEO: Coatesville HS golfer gets hole in one - twice

COATESVILLE, Pa. (WPVI) -- A 16-year-old female golfer has accomplished the seemingly impossible - she hit a hole in one - not once but twice in a single match.

There's no question that 16-year-old Samantha Staudt has a great golf swing.

She's a junior at Coatesville Area High School and the only girl on the varsity team. On Tuesday, she did something that none of the boys have ever done.

"I just hit it and it happened to be right at the pole and hit and spun and rolled three feet into the pole," said Staudt.

She got her first ever hole in one right on the 5th hole at Inniscrone Golf Club, a match against Avon Grove High School.

Staudt then got her second hole in one too, just three holes later.

"I went up there and I didn't see anything. I guess it rolled off the front and I didn't see it. Then the guy from Avon Grove went up and looked in the cup and said, 'How am I supposed to compete with this? This is ridiculous,'" said Staudt.

"I've been around golf a long time. Every now and then you'll see an article about someone who had two hole in ones but very, very rare," said Andy Watters, Inniscrone Golf Club.

At the end of the round, she turned in the score card. Her coach had to check his math a few times before he realized exactly what she had done.

"I looked at her sitting over on the hill and she was just smiling," said Coach Jason Castaldi, Coatesville High School.

Staudt started playing golf after a chance meeting at an afterschool program in elementary school.

"'Who thinks they can throw the ball?' So she threw one and I couldn't believe what I saw," said Eric MacCluen, Applecross Golf Academy.

MacCluen asked Staudt's dad if he could teach her to play golf and the rest is history.

"Sam should be an inspiration to all of them that it can be done. You just have to work hard," said MacCluen.

This past summer, she won the state's junior golf title and says playing with the boys has helped.

"I feel like I have to hit it farther but when I play against girls, I'm always blowing it past them," said Staudt.