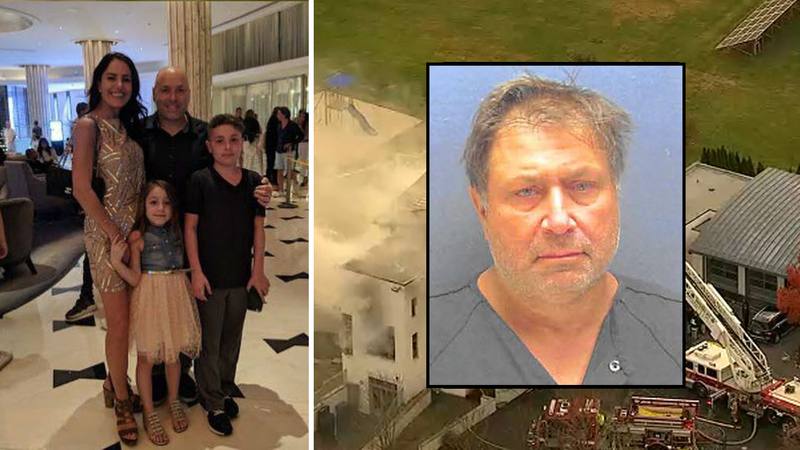 COLTS NECK, N.J. -- A New Jersey businessman charged with killing his brother and the brother's wife and two children pleaded not guilty Friday, as his lawyers said he loved his family dearly and never would have hurt them.

The killing has shocked the affluent horse country community of Colts Neck, home to rocker Bruce Springsteen and where former "Daily Show" host Jon Stewart and his wife run an animal sanctuary.

Paul Caneiro, 51, faces four counts of murder, along with arson and weapons charges, in the deaths of his brother Keith; Keith's wife, Jennifer; their 11-year-old son, Jesse; and their 8-year-old daughter, Sophia.

The family members were shot, stabbed or both at their mansion in the wealthy community of Colts Neck. Authorities say Caneiro then set the mansion on fire.

Prosecutors say a financial dispute led to the deaths. But outside the courthouse, Caneiro's lawyers said their client was devoted to his family.

"Paul Caneiro loved his brother, loved his sister-in-law like a sister, loved those children and would never do anything to harm them," said attorney Mitchell Ansell. "There's no reason on Earth for him to have harmed them."

Caneiro limped into a courtroom packed with scores of reporters and photographers. He sat stone-faced as Assistant Prosecutor Christopher Decker read the charges against him and handed him copies of the paperwork. Friends say Caneiro was seriously injured in a car accident several years ago that left him with back, leg and knee injuries.

Superior Court Judge James McGann ordered that Caneiro continue to be held at the Monmouth County Jail pending a hearing in late January. The defendant did not speak other than to answer "yes," ''no" or "I do" to a series of procedural questions from the judge.

Prosecutors allege that early on the morning of Nov. 20, he shot his brother to death on the lawn of Keith Caneiro's mansion in Colts Neck.
They say Caneiro then went inside the home and shot and stabbed Jennifer Caneiro to death, and repeatedly stabbed the two children to death as well. They say he then set a fire in the basement that smoldered for hours before being discovered.

Caneiro then traveled to his own home in Ocean Township, about 10 miles away, splashed gasoline on either side of the house and set it ablaze while his wife and two daughters were inside, authorities say. They escaped safely. Prosecutors say that fire was intended as a ruse to indicate that the larger Caneiro family as a whole was being targeted by someone.

Monmouth County Prosecutor Chris Gramiccioni said a day earlier that Paul Caneiro's motive "was financial in nature," stemming from two businesses - a computer systems company called Square One and a pest control business - that he and his brother jointly ran in Asbury Park. He declined to elaborate.

Ansell, the defense attorney, said he has seen no evidence that Caneiro was having financial difficulty. Ansell would not say whether Caneiro has put forth his own theory of who killed his brother and his family.