Dr. Martin Luther King Jr. honored with day of service in Philadelphia and across the area 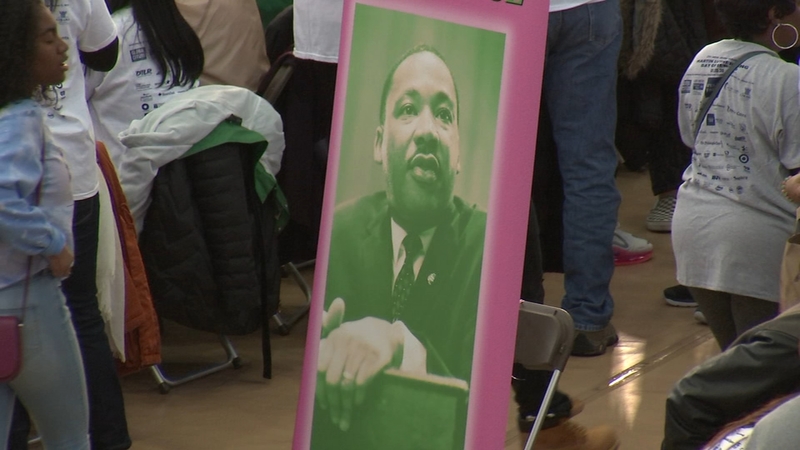 PHILADELPHIA (WPVI) -- Thousands of people in our area gathered on Monday morning to honor the legacy and mission of civil rights icon Dr. Martin Luther King.

The country's first King Day of Service was launched in Philadelphia in 1996, and is now the largest King Day event in the nation.

Volunteer McKenzie Rose Johnson of North Philadelphia told 6abc, "Martin Luther King did a lot for us, and sometimes we don't show it because he only has one day."

Volunteer Stephanie Childs added, "He was connected to many ministers here in Philadelphia. He did the Girard College walk to help change that student population. He has just been all over Philadelphia.

Childs continued, "We honor him just like the nation should honor him."

Todd Bernstein, Founder and Director of MLK Day of Service, outlined the effort, saying more than 150,000 volunteers from throughout the region are serving in 1,800 projects.

Rise Against Hunger volunteers are packed 25,000 meals to be sent all over the world.

"We have rice. We have dried vegetables, and then the most important key part is the vitamin sachets," indicated Latoya Gillyard of Rise Against Hunger.

Gillyyard continued, "This is something that Dr. Martin Luther King spoke about so passionately about ending hunger and ending poverty."

The MLK Commemorative Committee of Chester and Vicinity began this day of service with coffee and breakfast at the MJ Freed Theatre.

This year's theme is centered on the importance of being counted, focusing on the 100th anniversary of the 19th amendment and the role of black women in the suffrage movement.

"There were black women in leadership like Harriet Tubman, Sojourner Truth, Ida B. Wells, and they were then eliminated by actually being able to vote," Bernstein explained.

He added, "Suppression is still an issue in terms of voting."

Participants grabbed hammers and built and decorated wooded boxes for census outreach workers to raise awareness about the importance of the census.

The City of Philadelphia is preparing to honor the legacy and mission of civil rights icon Dr. Martin Luther King.

"The federal dollars that are allocated to cities like Philadelphia depend on the population count," Bernstein pointed out.

Governor Tom Wolf emphasized, "The Census is upon us. 2020. We have got to be counted, each and every one of us."
Report a correction or typo
Related topics:
community & eventscenter city philadelphiaphiladelphia newsmlk dayphiladelphia proudphilly proud
Copyright © 2021 WPVI-TV. All Rights Reserved.
TOP STORIES
Father, 2 daughters and niece killed in South Jersey crash
Recovered body matches description of missing woman: Police
Fauci warns 'things are going to get worse' with COVID
AccuWeather: Sunny and nice start to the week
Man using ATM shot after refusing to give up cash: Police
MLK Drive reopening to vehicles this week: What you should know
Frustration as Biden, Congress allow eviction ban to expire
Show More
12 injured during incident at sports complex in Manheim, Pa.
Tornado outbreak: 9 twisters confirmed in Philadelphia region
Gibson excels in Phils debut; Realmuto, Harper pound Pirates
Philly restaurant mandates proof of vaccination to dine inside
Bacon may disappear in California as pig rules take effect
More TOP STORIES News