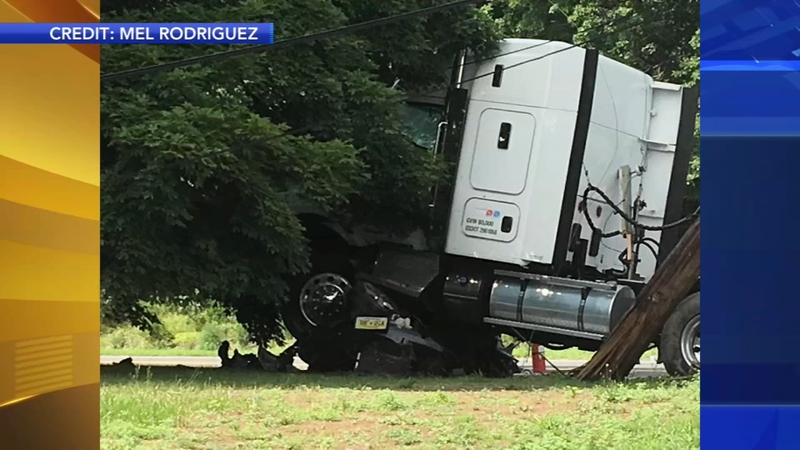 FRANKLIN TWP., N.J. (WPVI) -- Authorities say a couple and their adult daughter were killed when their car collided with a tanker truck in southern New Jersey, a crash that also seriously injured their 11-year-old son.

In the victims' small second-floor apartment in Bridgeton, family and friends gathered to recite the rosary.

A makeshift shrine with photos, candles and religious artifacts served as the centerpiece for what was to be an emotional prayer service.

"They are completely loved, it was an aunt, mom, uncle, father, cousin, sister, they were all loved. We loved them all," said Rosario Tlapa-Baez-Baez, a cousin.

A crash involving a tanker truck and car is under investigation in Gloucester County, New Jersey on Sunday night.

Authorities say the three were killed around 3:20 p.m. Sunday when their car was struck by a tanker truck at the intersection of West Boulevard and Lake Road In Franklin Township, Gloucester County.

The car overturned and became pinned under the truck's cab as both vehicles skidded off the road, trapping the family in their vehicle.

The driver, 19-year-old Mariela Cardoso-Baez, and her parents, 44-year-old Jose Cardozo and 45-year-old Adriana Baez Mellado were killed in the crash.

The couple's 11-year-old son, Jonathan, was rushed to the hospital and is recovering from various injuries.

"They were coming back from Berlin," said Baez. "I'm guessing they all went to eat and they were on their way back and the accident happened."
The truck driver was treated at a hospital for head and neck pain. The cause of the crash remains under investigation leaving the family with many questions.

"How did it happen, how did she get hit, or what happened and whose fault was it mainly? We want to know whose fault it was," said Baez.

Meanwhile, relatives were caught in their grief through the rosary service especially for Mariella who had graduated from Bridgeton High School and was about to turn 20 on July 16.

"I really loved her and she's really like a big sister," said cousin Lewis Garcia-Baez. "I didn't get a proper chance to say goodbye but I hope she's in a better place now."

With funeral services pending, family members were reaching out to all of their relatives and friends for any financial help.