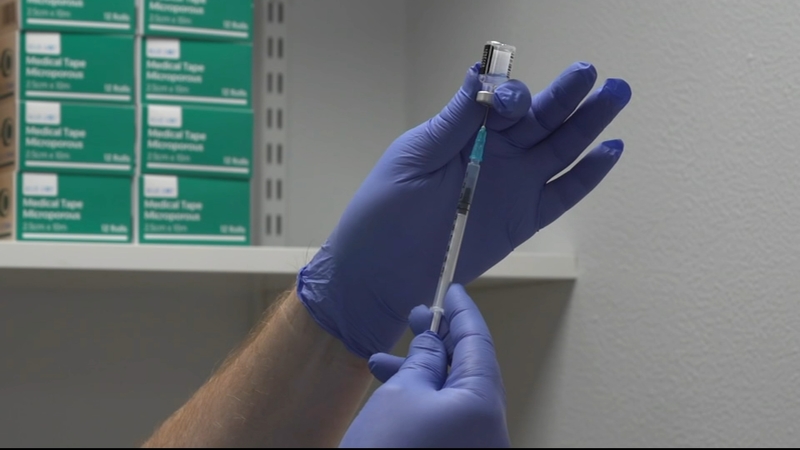 PHILADELPHIA (WPVI) -- The vaccine against COVID-19 is a light at the end of a long tunnel, but why are thousands of doses still sitting in freezers?

The CDC says 22 million doses have been distributed to hospitals and pharmacies across the country, but only nearly nine million people have received their first dose.

There may a bit of a delay in reporting doses being given out, but it's clear there are some major hurdles.

Some hospitals across the country have had to throw away vaccine doses because they expire shortly after they're taken out of cold storage. Some experts are also blaming rules on who gets priority.

First in line, of course is healthcare workers, first-responders and staff and residents at long term care facilities.

But if doses are going to go unused, many are now saying they should go to other people - whomever is around so that no doses are wasted.

"We have a lot more that we need to do because right now, across the country, the freezers are filling up with this vaccine and it's not where we need it," said Dr. David Shulkin, Former Secretary of Veterans Affairs.

And this a race against time as the virus continues to spread. More than 370,000 people have died in the United States due to COVID-19 with 27,000 just in the first ten days of the new year.

Japan also recently reported a potentially concerning new variant. Officials with the World Health Organization say the new variants of the virus including the ones first reported in South Africa, United Kingdom and now Japan do not seem to be more deadly but do seem to spread faster.

"Even as vaccine starts protecting the most vulnerable, we're not going to achieve population, or herd immunity in 2021 and even if it happens in a few pockets it's not going to protect the world," said Dr. Soumya Swaminathan during a WHO conference Monday.
Report a correction or typo
Related topics:
health & fitnesshealthcheckcoronaviruscovid 19 vaccinecovid 19
Copyright © 2022 WPVI-TV. All Rights Reserved.
COVID-19 VACCINE
Fauci optimistic omicron will peak in February
After the omicron wave, what's next for the COVID pandemic?
COVID testing company sued over alleged scheme
Booster shots needed against omicron, CDC studies show
TOP STORIES
1 dead, 4 injured after driver crashes into utility pole in Montco
Fire on roof sends smoke billowing over Center City
Fauci optimistic omicron will peak in February
5 tax changes that can boost your refund this year
Former CHOP patient becomes nurse at new King of Prussia hospital
Woman says someone followed her in Center City using Apple AirTag
Family demands justice after 23-year-old woman found dead after date
Show More
How to order your free COVID tests from the government
How a 73-year-old grandmother outwitted a scam artist
FBI issues new warning on QR codes
After the omicron wave, what's next for the COVID pandemic?
Tax filing season starts Monday. What to expect for 2022
More TOP STORIES News