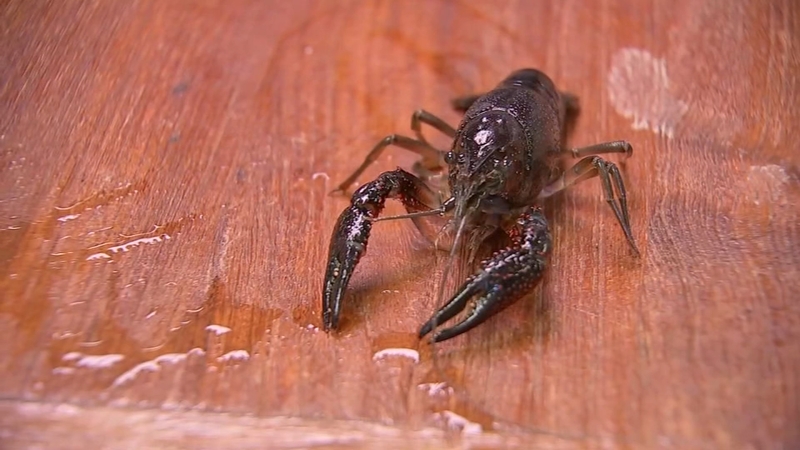 BRISTOL BOROUGH, Pennsylvania (WPVI) -- Crawfish, crawdads, mudbugs. They have no shortage of nicknames, and now they have been found to be populating waterways in Bristol Township.

That is something Dave Baskin learned the hard way.

When he heard his dog, Ginger, yelping he ran over to see what was wrong.

What he saw made his jaw drop.

"She's standing there with this crayfish hanging on her ear. And she's real docile and she's not moving. It's hanging there. I poured water on them to make it let go, you know," he said.

But that was not a common crayfish you would normally find in Bucks County, Pennsylvania. It was a Red Swamp Crayfish native to the Gulf Coast and Mississippi River.

Wildlife officials describe them as one of the worst invasive species in the world, capable of wiping out amphibian populations.

And they can quickly and easily spread. In fact, David Lieb, an invertebrate zoologist with the Pennsylvania Boat and Fish Commission says, "It can travel across land, from water body to water body which makes it kind of unique in terms of crayfish. That makes it also difficult to control."

"They are the main ingredient in Gumbo, and several other recipes from the Cajun, Louisiana area. They're well known and they are quite delicious," he says.

And since the Red Swamp Crayfish is categorized as "invasive" you can legally catch and eat as many as you would like if you can get past their appearance.

"I know they are a little scary to some people but you shouldn't be afraid of them really," Kozlansky says.

The reason why the Red Swamp Crayfish are found in the wild in parts of California, Europe, and other parts of the world is because people have tried to harvest them for food, but they invariably escape and quickly multiply.