The most recent incident happened just after 9 p.m. in the city's Tioga-Nicetown section.
WPVI
By 6abc Digital Staff and Jaclyn Lee 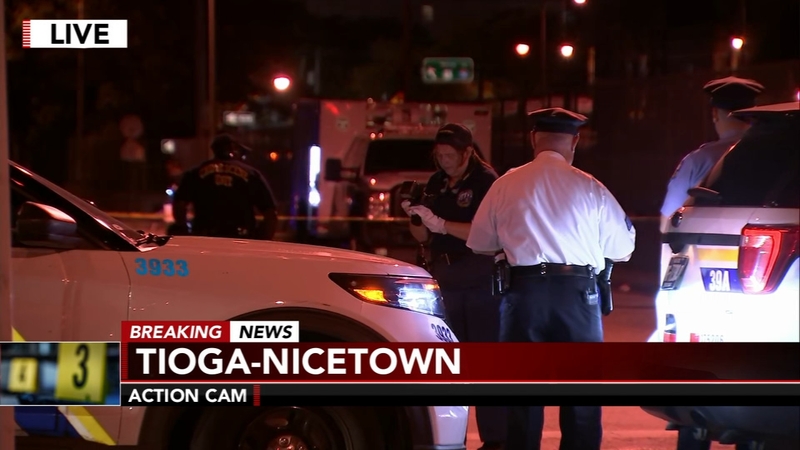 PHILADELPHIA (WPVI) -- A violent weekend in Philadelphia has left 11 people shot and five dead in separate incidents across the city.

The most recent incident happened Saturday just after 9 p.m. in the city's Tioga-Nicetown section.

Police say a 25-year-old man was shot multiple times throughout the body on the 1500 block of Saint Lukes Street.

#BREAKING: 25 y/o man shot multiple times and killed. Occurred at 9:08pm at 1500 Saint Luke’s Street. Police have not made any arrests @6abc pic.twitter.com/Bg2IX5Zyuv

The victim was transported to Einstein Medical Center, where he was pronounced dead a short time after.

Earlier in the afternoon, just before 3 p.m., a double shooting occurred in the city's Kensington section.

Police say two men were shot on the 3100 of Kensington Avenue. Both victims are currently listed in critical condition at Temple University, officials say.

Earlier Saturday morning, police were on the scene for a shooting in the city's Wynnefield section.

Police say a man was shot in the upper body and found lying in the parking lot of a Gulf gas station around 5 a.m. on the 2200 block of Bryn Mawr Avenue.

He was rushed by police to a nearby hospital where he died from his injuries.

Just before midnight, police were on the scene of a double shooting in the city's Tioga-Nicetown section.

Police were called to the 3300 block of North Uber Street where two women were shot.

Police say a stray bullet hit a nearby house, but nobody was injured.

Authorities were called around midnight to the 1700 block of South Hollywood Street for a report of gunshots fired.

Police arrived and found two male victims each shot multiple times. Officials say a 25-year-old man is in critical condition, while a 30-year-old man died from his injuries.

The bloodshed continued in Southwest Philadelphia.

Police were called to a Rite Aid parking lot near the intersection of 68th Street and Woodland Avenue. Shots were fired around 2 a.m. leaving a man dead, officials say.

A short time later in the city's Kensington section, more gunshots were fired.

Police say just after 3 a.m. they were called to the 1800 block of East Tioga Street. That's where a man in his 30s was found shot in the head. Officials say he died from his injuries.

So far, no arrests have been made in any of these cases. Anyone with any information is asked to call police at 215-686-TIPS.