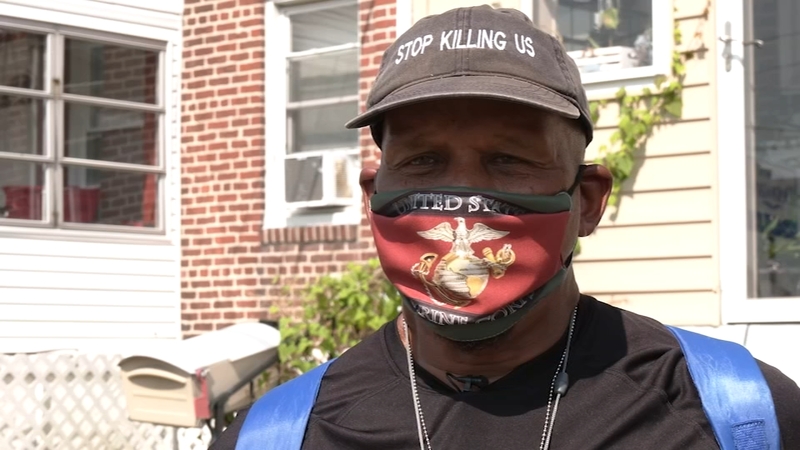 PHILADELPHIA (WPVI) -- The rash of gun violence in Philadelphia can make people feel helpless to do anything about it. But one local man is taking the issue into his own hands.

He's walking more than one hundred miles to bring attention to the gun violence epidemic. It's a task he's taking on despite this week's extreme heat.

"Today it's supposed to be 97 (degrees)," said Jamal Johnson of Germantown.

It's dangerously hot weather, but Johnson says there's something even more dangerous: gun violence in the city of Philadelphia.

"We need to stop this," he said as he held a sign with an illustration of a Black man who'd been shot in the street being carried away by his friends.

When it wasn't enough just to talk about ending gun violence, Johnson started to walk. He started the "Stop Killing Us March" four years ago, originally to speak out against police brutality.

"I began this in 2017. It was actually started because of the police brutality that was rampant at that time," said Johnson.

The march now takes his message against gun violence from the streets of Philadelphia to Washington, D.C. Johnson is committed to walking the entire way joined by supporters at various stretches.

"We left on Monday the 9th, and we've been going ever since," he said.

It's a journey of roughly 150 miles. By car, it would take two hours and 30 minutes. On foot, it takes two days and five hours. That's if you're going non-stop. Johnson is not.

"I mapped it out to three weeks," he said, noting that he's done the walk in the past in as little as 10 days. "We've extended it so other people could join and be a part of the whole thing."

Johnson has gained supporters over the years for his activism. That includes earlier this year when he went on a hunger strike to encourage Mayor Jim Kenney to declare a state of emergency due to gun violence in Philadelphia. Instead, Kenney created a resolution regarding gun violence.

A Marine veteran from Philadelphia has ended his 26-day hunger strike to bring change to how the city is dealing with gun violence.

Johnson hopes his march will push even more action forward when he meets with leaders of the Congressional Black Caucus in Washington, D.C.

"I would personally like them to encourage Mayor Kenney to declare a state of emergency in Philadelphia due to gun violence," he said.