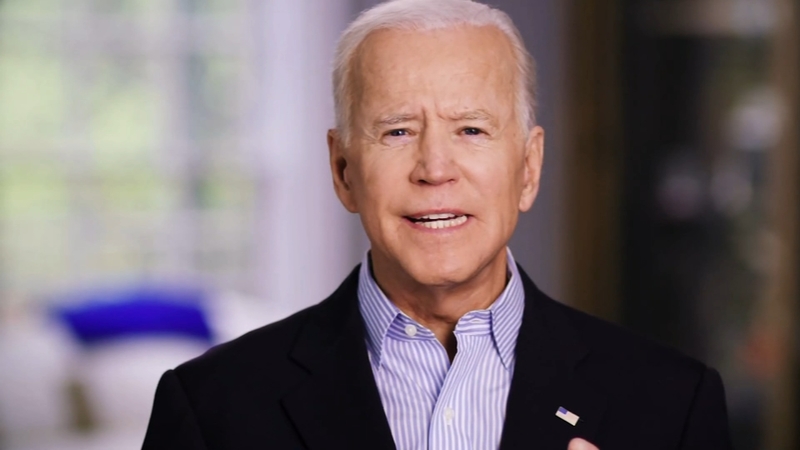 WILMINGTON, Del. (WPVI) -- Former Vice President Joe Biden's worst kept secret is now official, and after his announcement to run for president, he headed to Wilmington.

Biden chose to make his announcement on social media in a pre-taped video on Thursday morning.

The Tweet alongside the video reads, "The core values of this nation... our standing in the world... our very democracy...everything that has made America -- America --is at stake. That's why today I'm announcing my candidacy for President of the United States. #Joe2020"

Biden's announcement sparks a busy campaign schedule with stops on The View tomorrow and campaign stops listed on his website "Joe 2020."

The Action Cam was in Wilmington, Delaware today as Biden traveled by train back to his hometown to spend time with family and friends.
EMBED More News Videos

Biden makes a stop in Wilmington after announcing presidential run on April 24, 2019.

The 76-year-old Scranton born and Delaware bred longtime Democratic leader began as a US Senator in Delaware and ran unsuccessfully for President in 1988.

Obama did not endorse Biden, nor is he expected to endorse any candidate early in the Democratic primary. But the fact that he released a statement - something he hasn't done after any other candidate announcements - underscores his close personal bond with Biden.

Obama spokeswoman Katie Hill says Obama relied on Biden's "knowledge, insight, and judgment throughout both campaigns and the entire presidency."

Biden has always maintained a strong connection to the Philadelphia area and sources say his campaign presence in the region will be significant.

Thursday night, a fundraiser was held for Biden at David Cohen's Philadelphia home. Cohen is the senior executive vice president of Comcast and a major political fundraiser.

Two to three hundred of his die hard supporters paid $2,800 a pop to get in.

Among those were donors with deep pockets from across the region and a slew of politicians like former Congressman Bob Brady, Senator Bob Casey and others. The event was described by some attendees as crowded and hot. They say Biden lit up the crowd of supporters primarily beating up on President Donald Trump. Biden left just after 8 p.m.

Biden is expected to spend a lot of time in Pennsylvania where Trump won in 2016.

Biden's first major public event will be at a union hall in Pittsburgh on Monday.His focus? Winning back blue collar workers.