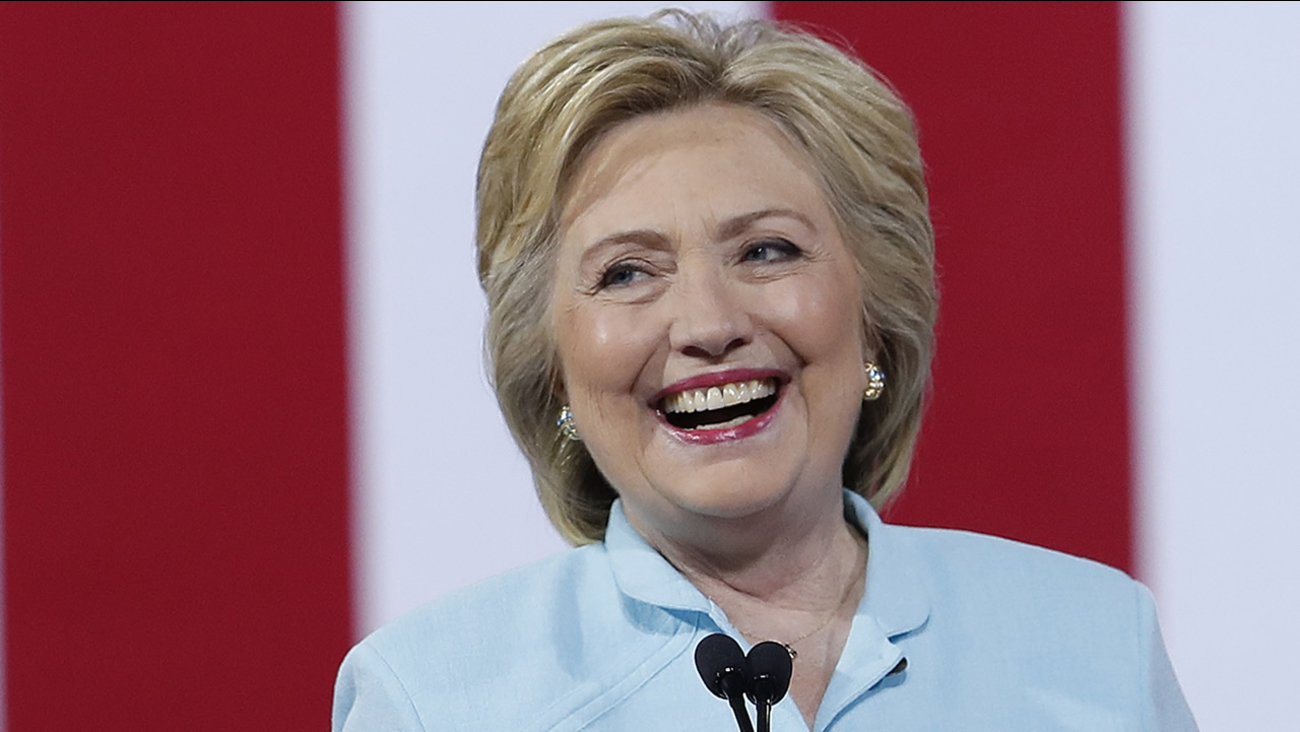 Delegates erupted in cheers throughout the roll call of states on the floor of the Democratic convention.

The roll call was one more opportunity for Sanders supporters to voice their fierce loyalty to the Vermont senator. Sanders stood with the Vermont delegation and moved to make Clinton's nomination official.

"I move that Hillary Clinton be selected as the nominee of the Democratic party for president of the United States," said Sanders.

She won the nomination after votes were cast by the South Dakota delegation.

Hillary Clinton became the Democratic nominee for president after South Dakota cast its votes at the DNC.

Her landmark achievement saturated the roll call with emotion and symbols of women's long struggle to break through political barriers. A 102-year-old woman, born before women had the right to vote, cast the ballots for Arizona.

Martha McKenna, a Clinton delegate from Maryland, said the night felt like a celebration for Sanders' campaign as well as Clinton's. But the mother of two young girls said she was most excited to see Clinton officially named.

"The idea that I'm going to be here when the first woman president is nominated is overwhelming," she said.

Clinton's campaign hoped the night of achievement, personal stories and praise could chip away at the deep distrust many voters, including some Democrats, have of the former secretary of state, senator and first lady. Much of the convention's second night was being devoted to introducing voters to Clinton anew, including three hours of speakers highlighting issues she has championed for years, including health care and advocacy for children and families.

"Tonight we will make history, about 100 years in the making," said Karen Finney, a senior adviser for Clinton's campaign. "What we're really going to focus on tonight is telling that story, and telling her story, talking about the fights of her life."

The stories were being told by a long list of lawmakers, celebrities and advocates. Among those pledging support for Clinton were the "mothers of the movement" - several black women whose children were victims of gun violence. Clinton has met privately with the mothers and held events with them, and they've become an emotional force for her campaign.

Clinton aides believe a focus on policy is another way to rally Sanders' supporters, especially those who threatened to stay home or vote for Republican Trump. While the opening night was interrupted by boos and chants of "Bernie," there were fewer signs of discord Tuesday.

Sanders had implored his supporters to not protest during the convention. Still, several hundred people gathered at Philadelphia's City Hall under a blazing sun Tuesday chanting "Bernie or bust."

Trump cheered the disruptions from the campaign trail. In North Carolina, he told a convention of the Veterans of Foreign Wars that, "our politicians have totally failed you."

When Trump mentioned Clinton's name, the group answered with shouts of "Lock her up!" an echo of the chants at last week's Republican convention.

Trump has been a frequent target at the Democratic gathering, where several videos featured his comments about women and the disabled, and tried to discredit the real estate mogul's business record.

First lady Michelle Obama was a star of opening night, making an impassioned case for Clinton as the only candidate in the presidential race worthy of being a role model for the nation's children. President Barack Obama and Vice President Joe Biden will speak Wednesday, along with Virginia Sen. Tim Kaine, Clinton's new running mate.

Bill Clinton had the spotlight Tuesday night. The former president has campaigned frequently for his wife during the White House race, but mostly in smaller cities and towns, part of an effort by the campaign to keep him in a more behind-the-scenes role.

During Hillary Clinton's first presidential campaign in 2008, her husband angered some Democrats with dismissive comments about Obama. He's had flashes of frustration this year, particularly when his own record on trade and law enforcement has been challenged by the party he once led, but has largely stuck to the campaign's messages.

The stakes for him are particularly high following his much-criticized decision to meet privately with Attorney General Loretta Lynch in the middle of the FBI's investigation into his wife's email use at the State Department.