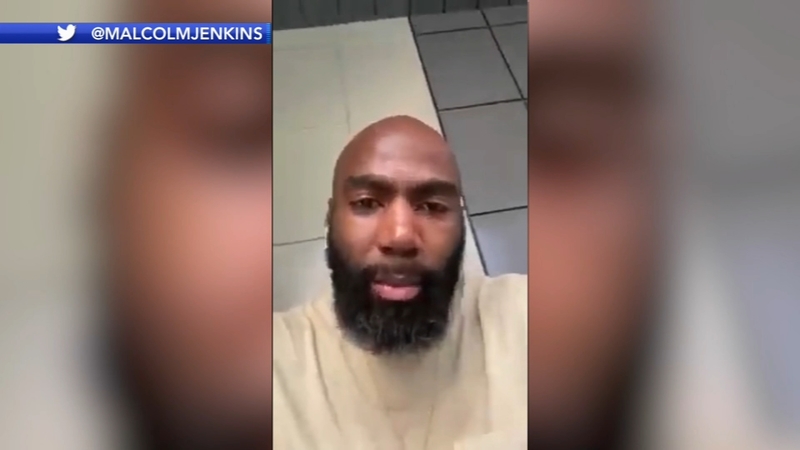 PHILADELPHIA -- Drew Brees was sharply criticized by fellow high-profile athletes, including teammate and former Philadelphia Eagle Malcolm Jenkins, on Wednesday after the Saints quarterback reiterated his opposition to kneeling during the national anthem.

In an interview with Yahoo, Brees was asked to revisit former NFL quarterback Colin Kaepernick's 2016 protest of police brutality against minorities, in which Kaepernick knelt during the national anthem before games.

Highlight: @readdanwrite asks @drewbrees what the star NFL quarterback thinks about "players kneeling again when the NFL season starts."@drewbrees: “I will never agree with anybody disrespecting the flag of the United States of America or our country.”

"I will never agree with anybody disrespecting the flag of the United States," Brees began, adding that the national anthem reminds him of his grandfathers, who served in the armed forces during World War II. "In many cases, it brings me to tears thinking about all that has been sacrificed, and not just in the military, but for that matter, those throughout the civil rights movements of the '60s, and all that has been endured by so many people up until this point."

RELATED: Tobias Harris calls for more dialogue about race to make a change

"WOW MAN!! Is it still surprising at this point. Sure isn't! You literally still don't understand why Kap was kneeling on one knee?? Has absolute nothing to do with the disrespect of Flag of United States and our soldiers(men and women) who keep our land free. My father-in-law was one of those men who fought as well for this country. I asked him question about it and thank him all the time for his commitement. He never found Kap peaceful protest offensive because he and I both know what's right is right and what's wrong is wrong! God bless you," James tweeted.

WOW MAN!! 🤦🏾‍♂️. Is it still surprising at this point. Sure isn’t! You literally still don’t understand why Kap was kneeling on one knee?? Has absolute nothing to do with the disrespect of 🇺🇸 and our soldiers(men and women) who keep our land free. My father-in-law was one of those https://t.co/pvUWPmh4s8

men who fought as well for this country. I asked him question about it and thank him all the time for his commitement. He never found Kap peaceful protest offensive because he and I both know what’s right is right and what’s wrong is wrong! God bless you. 🙏🏾✊🏾👑

Jenkins was Brees' teammate when the Saints won the Super Bowl in the 2009 season, but spent the past six seasons with the Eagles before returning to New Orleans this offseason.

Jenkins posted an emotional response to his social media accounts.

"Drew Brees, you don't understand how hurtful, how insensitive your comments are. You are part of the problem. To think that because your grandfathers served in this country and you have a great respect for the flag that everybody else should have the same ideals and thoughts that you do is ridiculous, and it shows that you don't know history. Because when our grandfathers fought for this country and served and they came back, they didn't come back to a hero's welcome. They came back and got attacked for wearing their uniforms. They came back to racism, to complete violence," Jenkins said.

Jenkins ended the video by saying, "Cause when we step off this field and I take my helmet off, I'm a black man walking around America and I'm telling you, I'm dealing with these things, I'm telling you my communities are dealing with these things. And your response to me is 'don't talk about that here, this is not the place.' Drew, where is the place? I'm disappointed. I'm hurt. Because while the world tells you that you're not worthy, that your life doesn't matter, the last place you want to hear from are the guys that you go to war with and that you consider to be allies and to be your friends. Even though we're teammates, I can't let this slide."

Jenkins said he had recorded a few videos when thinking about how to respond to Brees, and deleted an earlier one he posted because "I knew it be more about the headlines. I want people to understand how those of us struggling with what's going on feel."

Jenkins said Brees did reach out to him to discuss their points of view. Jenkins said, however, he still felt compelled to post his reaction video.

"As I was trying to muster up the energy and find the words to address Drew Brees's comments I recorded this video. Before I could post it, Drew reached out to me to discuss his point of view.
All in all, I'm still posting this video because it's important for anyone who wants to consider themself an ally to know how these words and actions affect those who you want to help. Drew's words during his interview were extremely painful to hear and I hope he rectifies them with real action," Jenkins wrote.

Brees has said he supports those protesting police brutality but that he does not see the national anthem as the proper forum for that. In 2017, Brees participated with teammates who knelt before the national anthem, but then stood in unison when the anthem was played.

On Thursday morning, Brees issued an apology on Instagram:

"I would like to apologize to my friends, teammates, the City of New Orleans, the black community, NFL community and anyone I hurt with my comments yesterday. In speaking with some of you, it breaks my heart to know the pain I have caused.

In an attempt to talk about respect, unity, and solidarity centered around the American flag and the national anthem, I made comments that were insensitive and completely missed the mark on the issues we are facing right now as a country. They lacked awareness and any type of compassion or empathy. Instead, those words have become divisive and hurtful and have misled people into believing that somehow I am an enemy. This could not be further from the truth, and is not an accurate reflection of my heart or my character.

This is where I stand:

I stand with the black community in the fight against systemic racial injustice and police brutality and support the creation of real policy change that will make a difference.
I condemn the years of oppression that have taken place throughout our black communities and still exists today.
I acknowledge that we as Americans, including myself, have not done enough to fight for that equality or to truly understand the struggles and plight of the black community.
I recognize that I am part of the solution and can be a leader for the black community in this movement.
I will never know what it's like to be a black man or raise black children in America but I will work every day to put myself in those shoes and fight for what is right.
I have ALWAYS been an ally, never an enemy.
I am sick about the way my comments were perceived yesterday, but I take full responsibility and accountability. I recognize that I should do less talking and more listening...and when the black community is talking about their pain, we all need to listen.
For that, I am very sorry and I ask your forgiveness."