The woman was taken to an NYC area hospital and is expected to survive.
WABC 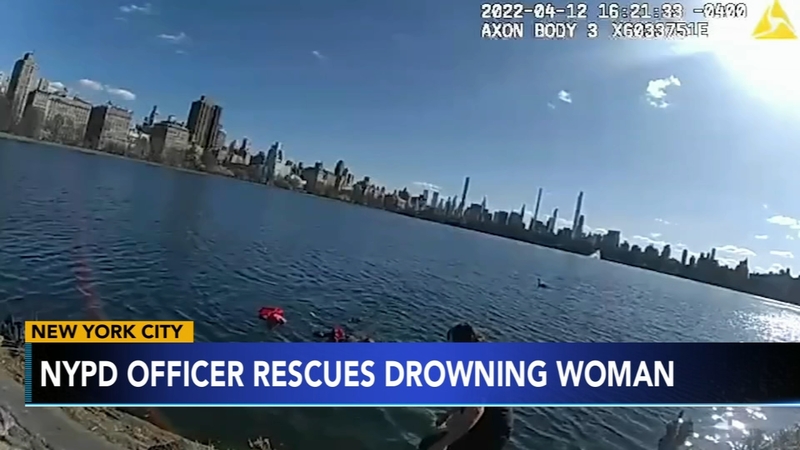 NEW YORK CITY, New York -- A heroic NYPD officer is crediting her skills in the water for helping to save a woman from drowning in the Central Park Reservoir last week.

Even now, days after NYPD Officer Emily Healy jumped in the water to save a woman, watching the newly released video of the heroic act reminds her how things could have gone really bad fast.

"That's my job and one that's of the best parts of my job, helping people," Healy told our sister station WABC in a exclusive interview Monday.

NYPD officer Emily Healy spoke to Eyewitness News after diving into the Central Park Reservoir to save a woman from drowning last week.

Healy and Sgt. Matthew Moschetto rescued the woman after she went swimming in the Central Park Reservoir.

At approximately 4:30 p.m. on April 12, Moschetto and Healy were on patrol. When they got to the northern end of the reservoir, a person flagged them down saying a woman was in the water.

Sure enough, there she was about 15 yards out, fully dressed with a red hat on.

"We tried to call her back on to shore, like hey come back, communicate with her, see if she could get back herself, when that wasn't an option she said she didn't know how," said Healy.

The officers knew they had to figure this out.

"Right now she's still floating, her clothing had become a flotation device or somewhat -- it was keeping her up. As we're watching her I noticed that her head starts to dip under the water," Healy said.

And so in Healy went, she was able to get the woman, who though she was in crisis, remained calm.

"She was very grateful, said thank you, thank God, and said she couldn't swim and didn't know what she do if we weren't there," Healy said.

One asset that made Healy uniquely qualified for the call was that she is on the NYPD swim team. She has been since it started a few years ago. She's a natural in the water.

"I swam in high school and college and competed year-round for that, so while it wasn't the warmest pool I've ever been in, it's good, and it was nice to say I have the skill set to go help this woman," Healy said.

The woman was taken to St. Luke's Hospital and is expected to survive.