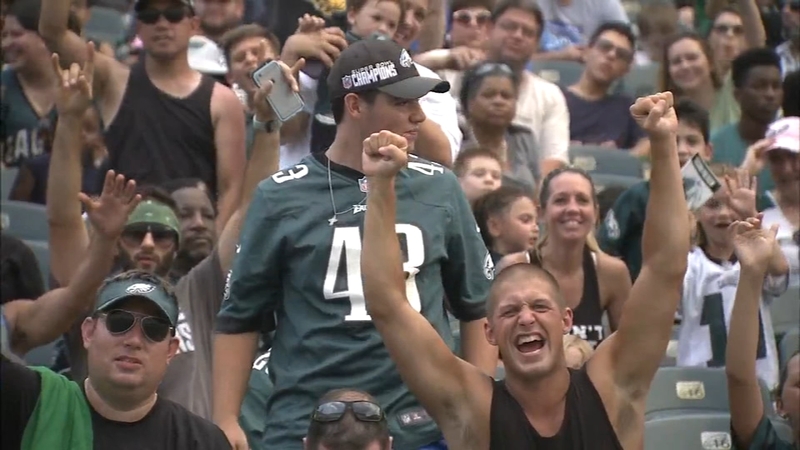 SOUTH PHILADELPHIA (WPVI) -- Philadelphia Eagles fans proved once again that they will come out in force any time the Birds show up at Lincoln Financial Field.

Sunday night was the first open pre-season practice, and Eagles Nation came out to support the reigning Super Bowl Champions.

Fans have waited months for this and they were not disappointed. Seeing the team running plays and working out again - they are ready for football season.

The stands were packed at the Linc full of fans who have waited six long months to see their Super Bowl champs in action.

Seating for the free event was first come, first served.

It was also military appreciation night, so players greeted service members on the sidelines and the American flag was brought down to the field by a paratrooper, which was met with big cheers.

"Absolute chills. Our military is the most important thing in this country, and when you see them fly down like that, you know they represent the USA and also the Philadelphia Eagles," said Dan Riben of Yardley.

We met some fans who are already preparing the next generation - from a baby due in November who is already named after Nick Foles, to a little guy named Carson.

Sunday's practice is the first of two open practices. The next one is Saturday morning.

The Eagles start their preseason schedule this Thursday with a home game against the Steelers.