Eagles fans tailgate ahead of 'Salute to Service' game

Thousands of tailgaters started flooding the stadium lots as early as seven hours before kickoff, excited for the day ahead.
WPVI
By Beccah Hendrickson 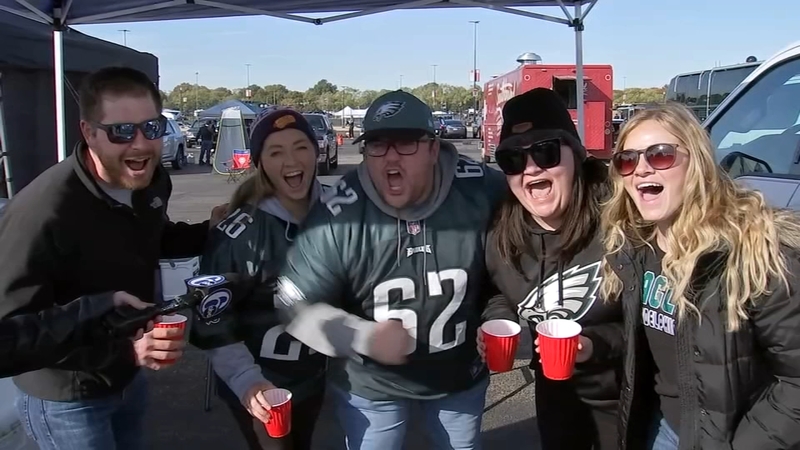 Eagles fans tailgate ahead of 'Salute to Service' game

PHILADELPHIA (WPVI) -- Philadelphia Eagles fans hope to cheer the team on to its first home win of the season Sunday.

Thousands of tailgaters started flooding the stadium lots as early as seven hours before kickoff, excited for the day ahead.

"This is the fun part before the game. This is our Thanksgiving tailgate, so we're having turkey, fillings, potatoes, the whole works," said Rosemary Fliszar from Bethlehem.

She and her family and friends got the tailgate rolling at 9 a.m. Tailgaters said they had a plan to power through the long day of fun and football.

"Gotta have the Starbucks, gets you going, gets you rolling. Next is the liquid breakfast. We're going to have a spicy Bloody Mary. Follow that up with some breakfast sandwiches and then we'll see where the day takes us from there," said Dave Romanofski from South Philadelphia.

Fans say an extra hour of sleep today helped prepare them too.

"I looked at my phone, I said, 'Wow, that's more than I thought," said Bob Bryan from Upper Black Eddy, PA.

Now what a lot of fans would really like is an Eagles win. Tailgaters think they'll be able to make a difference.

"We have to win one. I'm sure we're gonna win one shortly. I think this is the day right here," said Butch Carn from North Philadelphia.

Another reason to cheer? This is the Eagles Salute to Service game where veterans like Sgt. Dakota Meyer, a Marine sniper and "Hiring Our Heroes" Toyota ambassador, will be honored before the game.

"These are men and women who continue to go over and who continue to go over to allow us to have these freedoms that my family, your family have. We wouldn't have football. There's nations across the world that don't do these things, and those men and women are what allow us to have the freedoms we have here," said Sgt. Meyer.
Report a correction or typo
Related topics:
sportssouth philadelphiaveteransphiladelphia eagles
Copyright © 2022 WPVI-TV. All Rights Reserved.
PHILADELPHIA EAGLES
Eagles' Brandon Brooks announces his retirement
Philadelphia Eagles guard Brandon Brooks retires from NFL after rec...
Philadelphia Eagles rework Brandon Brooks' deal with reduced salary...
Man turns art into profession after football career abruptly ends
TOP STORIES
AccuWeather: Winter Storm Watch
Winter hurricane? 'Bombogenesis' explained ahead of weekend storm
Gunman follows woman home after accidental bump at market: Police
17-year-old student fatally shot near Southwest Philly high school
Armed robbers targeting Philadelphia fast-food restaurants
Teen uses hockey stick to save 2 boys from icy Bucks County Lake
Vaccine mandate kicks in for health care workers in Pa., NJ, Del.
Show More
Amy Schneider's historic 'Jeopardy!' run comes to an end
Man spotlights kids doing good deed in viral TikTok video
Kathryn Kates, 'Orange is the New Black' actress, dead at 73
Philadelphia Flyers GM: Will deal Claude Giroux only if he wants out
School district sending some students home early due to staff shortage
More TOP STORIES News