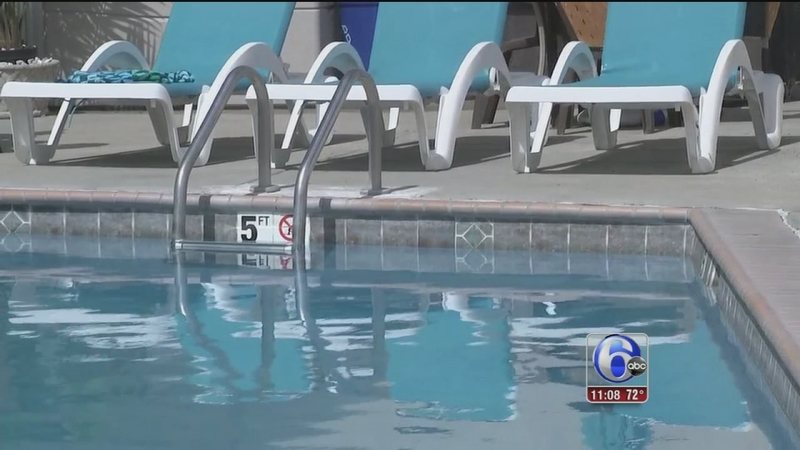 WILDWOOD CREST, N.J. (WPVI) -- A man is in critical condition after an electrical shock in a motel pool in Wildwood Crest, New Jersey.

The victim has been identified as Greg Subiszak, 34, of Fair Lawn, New Jersey.

The incident happened around 8:30 p.m. Saturday at the Aztec Motel located on the 400 block of East Lavender Road.

Butler and his son, Josh, of Northeast Philadelphia are still shaken after witnessing the ordeal.

"He's face down in the water. We thought he was playing with his son. And his son was saying, 'daddy, daddy,' he started crying," said Jerry Butler. "We said this ain't normal."

"I was calling him. He wasn't responding. The son started getting upset," said John Butler.

Unaware what had happened, one of the Butlers' friends, 17-year-old Ivan Christopher Martinez of Camden, jumped in the water to save the man.

"Chris went to touch him, and he went into convulsions in the pool. His body was shaking," said Jerry Butler. "I told Christopher to get out of the pool. Chris went to back up from the pool, and it was a filter he actually stepped on and got electric current up his leg through the filter."

"My body tensed up, and I couldn't stop shaking," said Martinez from his hospital bed. "I thought I wasn't going to be able to get out."

A maintenance worker eventually turned off the electricity and pulled Subiszak from the pool. A motel guest administered CPR until paramedics arrived.

"They worked him for about 12 minutes until they said they thought they got a heartbeat," said Jerry Butler.

The man was rushed to Penn Presbyterian Medical Center.

A man is in critical condition after being shocked by electricity while swimming in a motel pool in Wildwood Crest, New Jersey.

Adamo Pipitone, the owner of the motel, says he's sick over what happened, but claims the pool was inspected and bonded by an electrician just three weeks ago. He speculates there may have been a short in a lamp post.

The Butlers say on this busy holiday weekend, the tragedy could easily have been worse.

"A lot of people would have been seriously hurt or possibly killed," said Jerry Butler.

Martinez, who expects to graduate from Camden County Technical School next month, says he has weakness in his arms, but expects be released Monday. His only wish is that he could have helped the man sooner.

He says, despite the risk, he would do it again.

"Yeah. I'd want someone to do it for me so I'd do it for them," said Martinez.

Pipitone says the pool will remain closed until the county health department clears it to reopen.