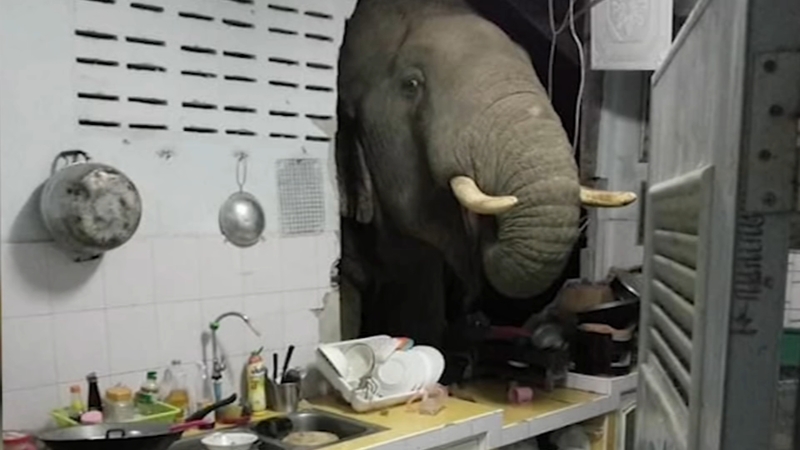 BANGKOK -- A woman in Thailand found an unexpected visitor in her house in the middle of the night last weekend -- a wild Asian elephant.

"We were sleeping and woke up by a sound inside our kitchen," said Ratchadawan Puengprasoppon, a resident of Hua Hin district in western Prachuap Khiri Khan province. "So we rushed downstairs and saw this elephant poked its head into our kitchen where the wall was broken."

Her wall already had a hole in it from when an elephant had smashed into her house last month, she said. The damage had not yet been repaired when the elephant showed up on Saturday and stuck its head through the hole.

Videos taken by Ratchadawan show the elephant extending its trunk to rifle through cupboards and drawers, knocking over dishes. At one point, it picked up what appears to be a plastic bag using its trunk, and placed it in its mouth.

"I have seen elephants roaming around our town looking for food since I was young," said Ratchadawan. "But this is the first time they actually damaged my house."

She added there was no food in her kitchen on Saturday when the elephant came in -- but it may have been trying to steal the salt stored inside.

The elephant came into the kitchen because it smelled food, the Department of National Park, Wildlife and Plant Conservation said in a Facebook post on Sunday.

"Elephants are herbivores so they need minerals from salty food, which is essential for their bodies. They would try to find any minerals, and we have educated local residents," the department said.

Ratchadawan's house may also have been targeted because it's located next to the entrance of a national park where elephants live, said Prateep Puywongtarn, a staff member at the Huay Sat Yai Subdistrict Administration Organization in Hua Hin.

Similar incidents often happen in the area due to its proximity to the national park and the elephants' habitat, he added. Elephant sightings and incidents typically increase during fruit harvest season -- in recent years, an elephant destroyed a house where a resident was keeping fruit produce, he said.

Elephant-human conflict has been on the rise in recent decades -- not just in Thailand, but in places like India and across Asia where the animals live. As human settlements and infrastructure expand, wildlife habitats shrink and become fractured, leaving animals with less land, smaller packs and fewer resources -- forcing them to roam in search of food.

"Although roughly half of the geographic range of elephant habitat in Thailand is considered suitable for long-term elephant conservation, much of this area is threatened by agriculture, roads and other development resulting in fragmentation and increased (human-elephant conflict)," said a 2018 study on elephants in western Thailand, published in the journal PLOS One.

Of 41 fruit and agriculture plantation owners surveyed in the study, nearly all said elephants raided their crops at least once a month -- and more than half said it was a daily occurrence. They also reported other types of property damage, like the breaking of water pipes and water tanks.

"No single mitigation method can address the multifaceted causes of the problem, which stems from increased development of original elephant habitat," the study said. Long-term solutions must include "efforts to restore natural elephant habitat, proper land use planning, and crop choices that are less attractive to elephants," as well as "securing corridors to allow elephants to move to additional habitats."

Conservationists have also recommended similar measures in India, home to the world's largest population of endangered Asian elephants. For years, human-elephant conflict has increased -- elephants kill about 500 people in India every year. It's a direct reflection of their shrinking habitat, leading them into more contact with humans, conservationists say.

In China, the problem has been thrust to the fore this past month, with the nation captivated by a herd of 15 elephants currently making its way across the country's southwest. The elephants, which millions of people are watching via livestream, have trekked more than 500 kilometers (310 miles) since escaping from a nature reserve last year.

Though it's not clear why they left, biologists see the situation as a warning of what happens when elephant habitats are degraded.

"The traditional buffer zones between humans and elephants are gradually disappearing, and the chances of elephants' encountering humans naturally increase greatly," said Zhang Li, a wildlife biologist and professor at Beijing Normal University, according to the state-run Global Times tabloid.