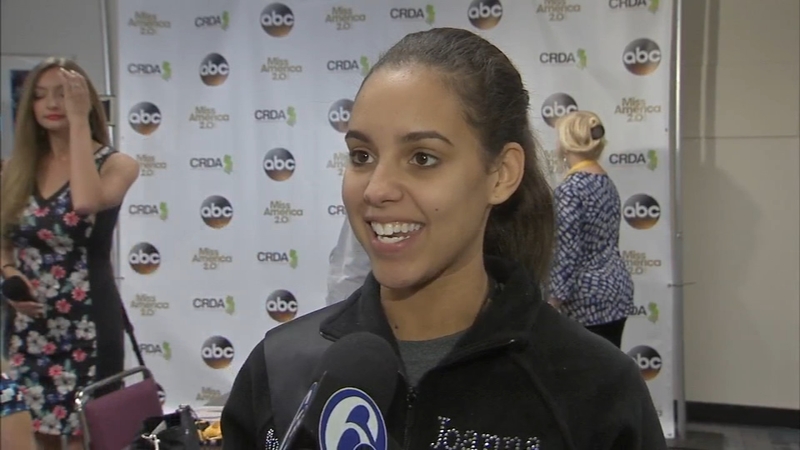 ATLANTIC CITY, N.J. (WPVI) -- This Miss America pageant season started out with controversy over the competition management, and accusations of bullying.

But in the preliminary round this weekend in Atlantic City, New Jersey, the contestants are trying to rise above all the noise and stay focused.

"It's helping us prepare better for the role of Miss America. You never know what they're going to throw at you, you've got to go with the flow," said Miss Delaware Joanna Wicks.

Wicks is a high school art teacher. She's bringing her creative side to the stage.

"It's upside down for the whole time," she explained. "You're kind of sort of like, 'what the heck is she painting?' and at the very end I flip it over and you'll see what it is."

Before they take the stage on Sunday, contestants will parade down the boards on Saturday in the annual shoe parade.

This year, Miss New Jersey Jamie Gialoretto will be paying homage to local folklore with her fiery look.

Gialoretto is from Gloucester Township. She's an avid Eagles fan, and a bit superstitious going into Sunday night.

"I have a little box of lucky charms. Not the cereal, but an actual box of little trinkets, and then I have a lucky rubber chicken. So somehow, that eases my mind makes me feel calm," Gialoretto said.

One portion that will be missing is the swimsuit competition.

"There's a part of me that hates the tradition to be taken away but, you know, it's a new world and I think that women need to stand up and be who they are, and not as an item to be viewed but to be known," said Tammy Conley of Georgia.

Recently, there were claims from the outgoing Miss America, Cara Mund, who said that chairwoman Gretchen Carlson and CEO Regina Hopper bullied and silenced her during her reign.

Carlson, the former Fox News host and a former Miss America, said she had no comment. Both she and Hopper have repeatedly denied bullying Mund.

This year's pageant is taking place amid a revolt by state organizations, most of which want Carlson and Hopper to resign; 46 of the 51 groups (the District of Columbia is included) have signed letters seeking their resignation.

They are unhappy with the way the decision to eliminate the swimsuit competition from the pageant was reached, among other issues.

The third and final night of preliminaries will be held Friday. The next Miss America will be crowned Sunday night.