Police: House explosion in Bucks County may be result of propane leak 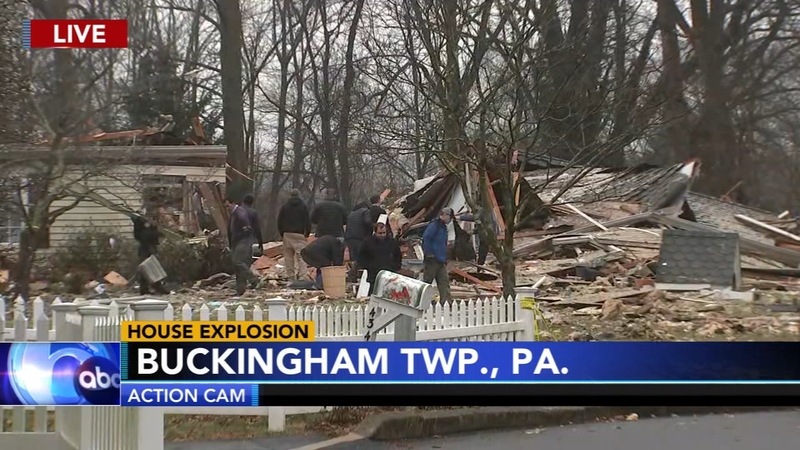 House explosion in Bucks County may be result of propane leak

BUCKINGHAM TWP., Pennsylvania (WPVI) -- Police say the explosion that leveled a home in Buckingham Township, Bucks County on Tuesday morning may be the result of a propane leak.

Buckingham Township police also pointed out that the area does not have natural gas service.

No official ruling on the cause of the blast has been determined.

The call went out to police and fire personnel shortly before 10 a.m. Tuesday for the report of an explosion on the 4300 block of Biddeford Circle.

Neighbor Steven Brush was getting ready to go work when he heard the blast.

"I thought for certain something had blown up in our basement. I went down saw nothing," Brush said.

Investigators are working to figure out what caused this home to explode: https://t.co/8TEXknGnwq pic.twitter.com/Yavv7z4oOb

But then his daughter went outside and realized what happened.

"She came back in and said 'our neighbor's house is gone,'" Brush said.

Officials said there was no fire present when they arrived at the home.

The Action Cam on the scene showed a pile of debris where the house once stood.

This woman says her brother lives 5 miles away and felt the explosion. She lives right next door: https://t.co/8TEXknGnwq pic.twitter.com/XwhTcSCxbJ

"Just heard a big explosion and the ground shook, a couple hundred yards away. It was pretty foggy this morning so you couldn't really see what was going on," neighbor Chris Dennis said.

"The loudest explosion I ever heard. My ears are still ringing from it. We ran out and saw our poor neighbors had no house. Took my phone out, called 911, and then I knew I had to call her next. That was the worst," the next-door neighbor said.

Neighbors said the family has lived in the home for 10 years.

"It's a total loss for the family, but I'm sure the community will surround them and support them and get them back on their feet. It's who we are," said Sgt. William Moffett, with the Buckingham Township Police Department.