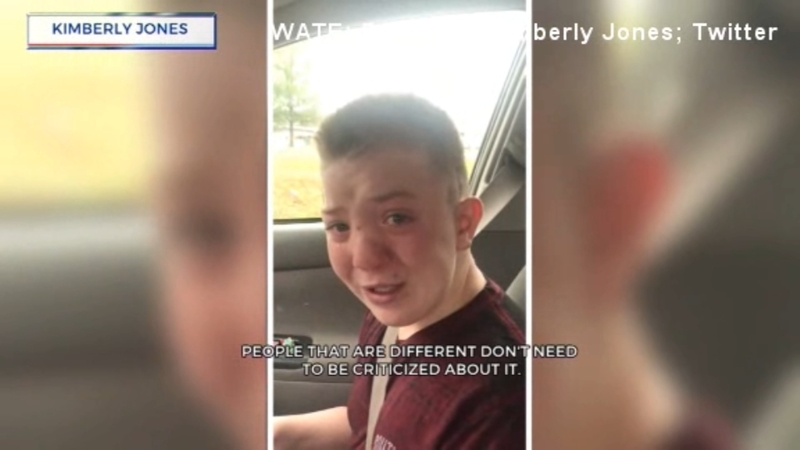 KNOXVILLE, Tenn. -- A Tennessee woman's video of her tearful son recounting being bullied at middle school has prompted a wave of support from athletes and entertainers.

Kimberly Jones said in a Facebook post Friday she had just picked up her son, Keaton, from school because he was too afraid to go to lunch.

In the video, Keaton said other students call him ugly, make fun of his nose and tell him he has no friends. He said milk was poured on him and ham was put down his clothes.

"Just out of curiosity, why do they bully?" Keaton said. "What's the point of it? Why do they find joy in taking innocent people and find a way to be mean to them? It's not OK.

"People that are different don't need to be criticized about it. It's not their fault. If you are made fun of, just don't let it bother you."

The video had more than 18 million views as of Sunday, and a crowdsourcing page for Keaton's future education had raised more than $29,000.

"We all know how it feels to want to belong," Jones said in her post, "but only a select few know how it really feels not to belong anywhere."

@DonteStallworth @Lakyn_Jones hopefully my video and the tweets that Keaton have been getting brings awareness to bullying and how serious it is in our school system pic.twitter.com/1Dujv3RxA5

Country music star Kelsea Ballerini tweeted that the next time she comes home to her native Knoxville, she wants to be with Keaton to witness the bullies apologize.

buddy next time I make it home to Knox I'm going to walk into that lunchroom with you and watch the bullies say they are sorry to you. you don't deserve that. keep your head up and continue to be kind...you will always Come out on top. sending a hug. https://t.co/fZn2hbMPKp

Retired race car driver Dale Earnhardt Jr. said on Twitter he wants Keaton to "add me to your long list of friends," and Snoop Dogg said on Instagram that Keaton "has a friend for life" and that "love is the only way to beat hate."

This is heartbreaking. But the response of support for him is a beautiful thing. Add me to your long list of friends Keaton. https://t.co/NKasvdo00u

This broke my 💔 today. Please be kind to one another. #standwithkeaton https://t.co/8XBbFmnuc1

Stay strong, Keaton. Don’t let them make you turn cold. I promise it gets better. While those punks at your school are deciding what kind of people they want to be in this world, how would you and your mom like to come to the Avengers premiere in LA next year? https://t.co/s1QwCQ3toi

#KeatonJones, your curiosity and kindness will overcome this moment and bring you many better days to come. #StandWithKeaton https://t.co/8t4ojKLs72

So I got the chance to spend the day with my new best bud Keaton. It was unbelievable to get to know him and realize that we have a lot in common. This dude is very special and has changed my life forever. Now I have the little brother I always wanted! God bless you my man pic.twitter.com/vMHVtnf2rC

Hey Keaton, unfortunately you aren't alone. A lot of kids are bullied, but they will be so uplifted by your courage. You're a hero, young man. You are treasured and valued. Let me know if you'd ever like to visit ESPN. You can be my special guest. https://t.co/N8mkUTYnEy