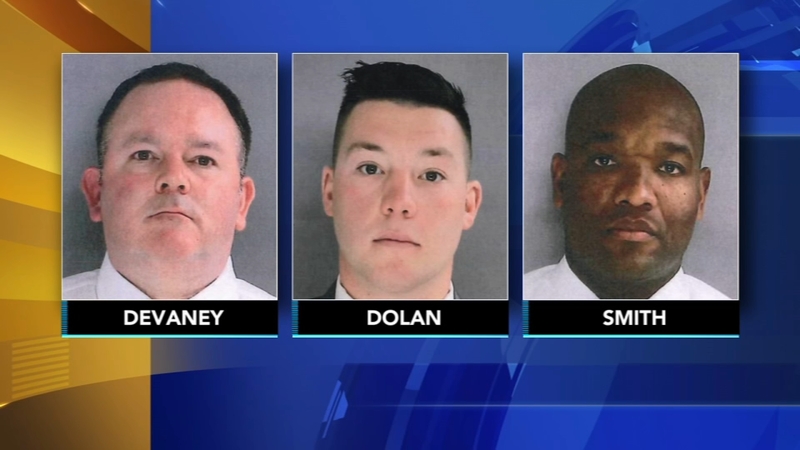 MEDIA, Pennsylvania (WPVI) -- Delaware County's district attorney announced charges Tuesday against three Sharon Hill police officers in connection with the death of an 8-year-old girl and the wounding of three others after a football game on August 27, 2021.

Officers Devon Smith, Sean Dolan and Brian Devaney are each charged with a total of 12 criminal counts of manslaughter and reckless endangerment.

"From the moment the call came in on August 27, my team of investigators and prosecutors has worked tirelessly to achieve justice for Fanta and the other victims of that tragic night. Today's charges are a big step forward in that process," District Attorney Jack Stollsteimer said.

Three Sharon Hill police officers mistakenly thought they were being fired upon from the vehicle and discharged their weapons more than a dozen times, sources tell Action News.

The shooting happened on the night of August 27 at the Academy Park High School in the 900 block of Coates Street in Sharon Hill.

That gunfire included two shots in the direction of the three officers, who were monitoring the crowd exiting the school's stadium after that night's football game.

The police officers then allegedly discharged their weapons in the direction of the Academy Park football field.

In all, four people were shot. Among them was 8-year-old Fanta Bility who was fatally wounded.

On September 2, 2021, officials announced that there was a high probability that the gunfire from the officers struck the four victims, including Fanta.

"We have now concluded beyond a reasonable doubt that it was, in fact, shots from the officers that struck and killed Fanta Bility and injured three others," Stollsteimer said in a news release.

Officials said the initial shots on Coates Street began with a verbal altercation at the football game between Angelo "AJ" Ford, 16, of Sharon Hill, and Hasein Strand, 18, of Collingdale.

A second teenager has been arrested in connection with the shooting death of Fanta Bility, the girl who was killed at a high school football game.

Ford is charged with serious crimes for his attempt to kill Strand, officials said. Meanwhile, Strand has pleaded guilty to aggravated assault for his role in wounding one of the children struck by gunfire and to illegal possession of a firearm.

In a news release, a spokesperson said under the terms of the plea agreement, Strand will serve between 32 and 64 months in prison.

"I fully realize that the tragic death of Fanta and the trauma inflicted on her family, the other victims, and community members involved, has been emotionally draining to all, including the investigators and prosecutors assigned. No one touched by this incident will ever be the same. I hope that today's announcement will help the community begin to heal through the knowledge that all the individuals who fired guns that night are being held accountable for their actions under our laws," said Stollsteimer.

Bond was set at $500,000, unsecured, for each defendant. A preliminary hearing has been scheduled for January 27.

Attorney Bruce Castor, who is representing the Bility family in a federal civil rights lawsuit, gave this reaction on behalf of the family.

"They are very, very pleased. The police, clearly by everybody's account, thought they had the right to shoot the car. They were wrong and they were dramatically wrong," said Castor.

"This is a sad day for our officers, who face criminal charges for trying to do their jobs and keeping the community safe. The FOP continues to support these fine officers and will provide a vigorous defense against these allegations."

"Our members have served the Sharon Hill community with respect and integrity, and we ask the public for continued patience as this case moves through the criminal justice system."

"Sharon Hill's heart is still broken. The entire Borough grieves for Fanta Bility and we again convey our deepest sympathies to her family and everyone affected by the shooting. Today's indictment of our police officers brings us to another solemn moment. Today we must reflect on our safety, and on those who are sworn to protect and serve. We respect the judicial process and while we have been patient in our approach, now that the Grand Jury has concluded its investigation, and given the serious charges issued by the District Attorney, we are able to move forward with measures that will hold the officers accountable."