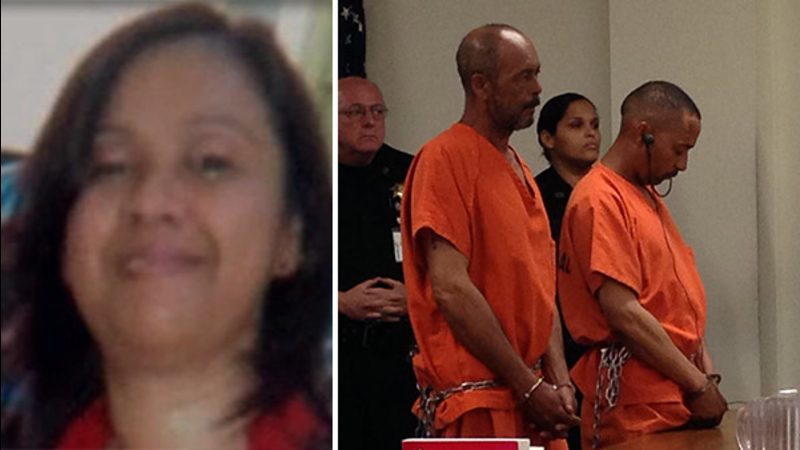 CAMDEN, N.J. (WPVI) -- A woman who was found in a shallow grave in Gloucester County was buried alive, police say, and now two men are facing murder charges.

36-year-old Carlos Alicea-Antonetti of Camden and 57-year-old Ramon Ortiz of Pennsauken are both charged with murder in the death of Fatima Perez.

Alicea-Antonetti and Ortiz, his alleged accomplice stood side-by-side in court.

Both men gave authorities somewhat different versions of what happened but this much is clear:

Perez, 41, was last seen alive Monday morning when she left her home on the 400 block of North 41st Street in Camden.

Alicea-Antonetti told police that they got into a fight and that Perez fell out of his car. He says that although she got hurt, she managed to get back in.

Alicea-Antonetti goes on to claim that he picked up Ortiz.

Both men admitted that the two tied Perez up, placed duct tape over her mouth and eyes, then drove to a wooded location where Ortiz dug a hole.

According to police, Alicea-Antonetti then admitted to putting Perez in the hole, pouring lime on her and burying her - while she was still alive.

Around 11:00 Wednesday morning Perez' body was discovered buried in an open area near Clayton Road between Corkery and Tuckahoe roads in Monroe Township.

Authorities say the body of 41-year-old Fatima Perez was found in open area near Clayton Road between Corkery and Tuckahoe roads in Monroe Township, Gloucester County.

The autopsy report on Perez concluded that her death was the result of asphyxiation and ruled the manner of her death to be homicide.

On Thursday in court, with family members sobbing in the background, the prosecutor laid out strong evidence against both men.

The victim's mother was asked if she had anything to say to the men?

"I don't have anything to say to them because God is going to deal with them. That is God's work to do," said Guadalupe Perez.

Meanwhile Perez's sister told Action News what she wanted people to remember most about her.

"My sister, at least for me, she was my guardian angel. She was always there for everybody - not just me, her family, friends, everybody," said Vanessa Castro.