AP
PHILADELPHIA -- A powerful union boss who has long held a tight grip on construction jobs in the Philadelphia region and wielded political power in the city and Statehouse has been indicted on embezzlement and fraud charges along with a city councilman who allegedly did his bidding, and six others.

Johnny "Doc" Dougherty exerted complete control over the union, according to the 116-count indictment, using that power to "repeatedly and persistently steal its funds and put his own self-interests over that of the membership." All told, the defendants misspent more than $600,000 in union funds, officials said.

Dougherty, 58, leads the International Brotherhood of Electrical Workers Local 98, with 5,000 members, along with the city's Building Trades Council, an umbrella group with more than 70,000 members. He has been at the helm of the century-old electricians union for 25 years.

The union over the years has emerged as a major political donor, spending tens of millions of dollars through its political action committees, mostly to help Democrats in Pennsylvania. 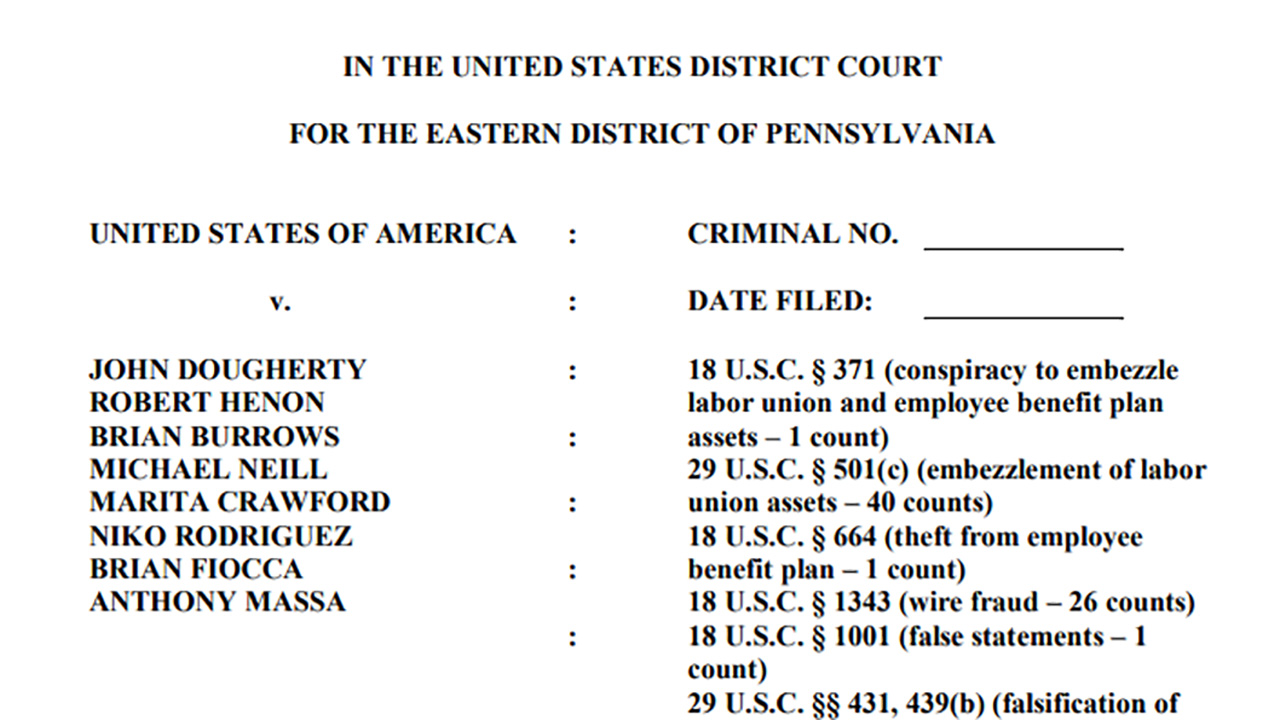 According to the indictment, Dougherty used union credit cards to buy groceries and household goods and to splurge on restaurants, and let others in his orbit do the same. He allegedly used union funds to pay contractors for work at his South Philadelphia home and bar. And he put friends and family members on the union's payroll, showering them with raises and overtime for hours they didn't work and using them to do personal tasks, prosecutors said.

Councilman Bobby Henon, a former union official, got a $70,000 union salary to press Dougherty's interests at City Hall, officials said in the indictment unsealed Wednesday. Henon used his office to pressure Children's Hospital of Philadelphia, Comcast Corp. and others to use union labor, prosecutors said at a morning news conference.

The union paid Dougherty $1.4 million between 2010 and 2016. He and the other defendants are due to appear in court Friday.

His lawyer, Henry E. Hockeimer, said Dougherty has devoted "all his energies" to the union for a quarter century, leading to dramatic increases in wages and benefits. "To allege that John in any way attempted to defraud the union he cares about so deeply is preposterous," Hockeimer said in a statement.

For twenty-five years John has devoted all of his energies to Local 98 and to those working in the trades in Philadelphia. Everyday his focus is on his family and his other family, IBEW Local 98. Every move he makes is done in order to better the lives of the membership of Local 98. And the dramatic increase in wages, health care benefits and the overall standard of living for the membership is a testament to that singular focus. To allege that John in any way attempted to defraud the Union he cares about so deeply is preposterous. He looks forward to his day in court and the opportunity to clear his name.

Dougherty helped Mayor Jim Kenney win election in 2015, the same year his brother, Kevin Dougherty, won a seat on the state Supreme Court. Henon, who rose through the union ranks to become its political director before winning a City Council seat in 2011, was charged with honest services fraud and other charges.

T.J. Rooney, a former state Democratic Party chairman, said the political reach of the electricians' union under Dougherty "in the region is unparalled and in the state is tremendously impactful."

Dougherty, however, is not "some old-school cigar-chomping union boss," Rooney said. The union, under Dougherty, has expanded its numbers and profile through apprenticeship programs and its deep involvement in community projects and charitable missions, Rooney said.

Henon has repeatedly denied any wrongdoing. The councilman's office said Wednesday that he will continue to serve.

Henon issued the following statement after the charges were announced:

Some of you may have questions about the recent news that the US Attorney is pursuing legal action against me and a number of other Philadelphia leaders.

I want to make clear: I have done nothing wrong. I have spent 28 years proudly working for Local 98. In 2011, I ran for City Council to give a voice to honest union men and women, working Philadelphians and those in need of a strong voice to represent them in this great city.

Since that time, every action I have taken as City Councilmember has been with the goal of serving working people. I have worked tirelessly to protect and serve my constituents from being victimized by powerful companies whose thirst for profit is unquenchable.

I will continue to serve, I look forward to clearing my name and I will never waiver in my pursuit to protect and serve the working people who live in and built this city.

My offices remain open and my team and I remain committed to providing excellent service to the people of Philadelphia.

Contractor pleads guilty to charges as reported by Jeff Chirico during Action News at 11 on January 28, 2019.

The defendants include Henon, the majority leader on council and chair of the public property and public works committee; union president Brian Burrows, and union officials Michael Neill, Marita Crawford, Niko Rodriguez and Brian Fiocca - Dougherty's nephew. Also charged was Anthona Massa, who ran a construction company that received more than $1.8 million from the union for work done between 2010 and 2016.