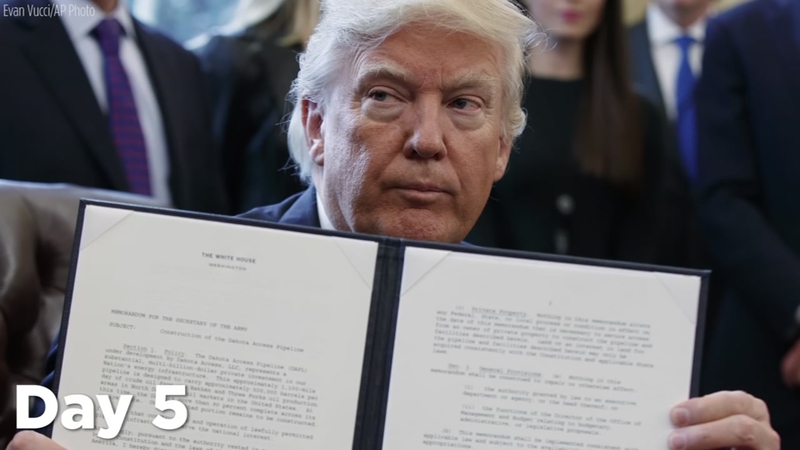 100 Days of President Trump: A timeline

From a Supreme Court nominee getting confirmed to decisions affecting international affairs, take a look back at moments that made headlines during President Donald Trump's first 100 days.

Trump's supporters celebrated his first day in office with a swearing-in ceremony, a parade and multiple balls.

The day after the inauguration, women from around the country descended on Washington, D.C. and participated in local marches to protest President Trump's proposed policies. Marchers participated for a variety of reasons, including social and environmental issues.

Peaceful protests are a hallmark of our democracy. Even if I don't always agree, I recognize the rights of people to express their views.

On Jan. 24, Trump signed an executive order to advance the progress of the controversial Keystone and Dakota Access Pipelines. Demonstrators had been camped out in protest of the construction of the Dakota Access Pipeline for nearly a year. Most of them voluntarily left the camp before the February deadline, but some refused and were arrested.

On Jan. 27, Trump signed an executive order restricting entry to the U.S. from certain Muslim-majority countries for the next 90 days. The order was met with protests, particularly at airports, and was blocked by the 9th Circuit Court of Appeals in February. A hearing will be broadcast next month for Trump's revised travel ban, which he signed March 6.

Everybody is arguing whether or not it is a BAN. Call it what you want, it is about keeping bad people (with bad intentions) out of country!

National Security Advisor Michael Flynn resigned on the evening of Feb. 13 amid controversy over his relationship with Russia. In his resignation letter, Flynn said that he "inadvertently" gave "incomplete information" about phone calls with the Russian ambassador.

During his first address to Congress, President Trump called for unity as he outlined his agenda. The speech was generally regarded as presidential.

On March 4, President Trump tweeted that he had learned that President Obama ordered surveillance on the Trump campaign.

Terrible! Just found out that Obama had my "wires tapped" in Trump Tower just before the victory. Nothing found. This is McCarthyism!

How low has President Obama gone to tapp my phones during the very sacred election process. This is Nixon/Watergate. Bad (or sick) guy!

After an investigation, both Democrats and Republicans say there is no evidence to support Trump's claim, according to ABC News, but the White House stands by it.

One of Donald Trump's campaign promises, to "repeal and replace" the Affordable Care Act, suffered a setback on March 24, when it was announced that the vote on the American Health Care Act would be postponed.

On April 6, the U.S. initiated a missile strike on a Syrian airbase. The strike came in response to a chemical weapons attack in Syria earlier that week that left at least 86 civilians dead.

More than a year after the sudden death of Justice Antonin Scalia, Trump's nominee for the U.S. Supreme Court, Neil Gorsuch, was confirmed on April 7.

President Obama's nominee, Merrick Garland, was not considered because Senate Republicans argued that the next president should choose the nominee. Trump had nominated Gorsuch in January. The former 10th Circuit Court of Appeals judge was confirmed after a historic rule change in the Senate, and he was sworn in on April 10.

Day 84: U.S. drops "Mother of All Bombs" on Afghanistan

On April 13, the U.S. military dropped on Afghanistan the largest non-nuclear bomb it had ever used in combat. The GBU-43, or massive ordnance air blast (MOAB), nicknamed the "Mother of All Bombs," targeted a complex of ISIS-K-controlled caves. The attack killed at least 94 militants, according to an Afghan official.

Treasury Secretary Steven Mnuchin and National Economic Director Gary Cohn on Wednesday announced President Trump's tax plan. The plan proposes one of the biggest cuts in the country's history, according to Cohn, but experts warned that a lower federal revenue could increase the national deficit.