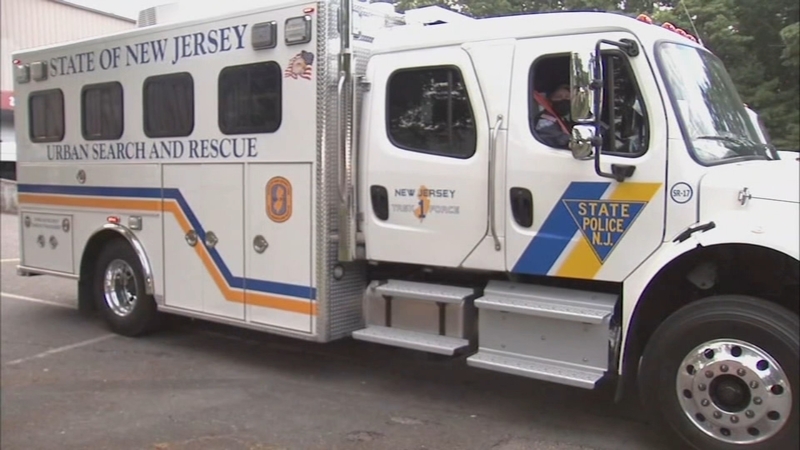 PHILADELPHIA (WPVI) -- The Pennsylvania Task Force 1 team is headed to South Florida to help with the search efforts at the site of the deadly condo collapse.

The team of 82 left from Philadelphia's Tacony section Wednesday night.

Half of these men and women come from the Philadelphia Fire Department, which sponsors the task force.

"We can only imagine the pain of those who have lost loved ones or are still waiting to hear about their loved ones," Pennsylvania Gov. Tom Wolf said. "The men and women of PA-TF1 know the dangerous work they will face when they arrive onsite, but the ability to bring closure to families and friends of the victims of this collapse is also a tremendous blessing."

The deployment is scheduled to last two weeks.

During a Wednesday night briefing, officials said the bodies of two children were the latest victims to be pulled from the rubble.

Mayor Daniella Levine Cava made the announcement nearly a week after the Florida building came crashing down. After some preliminary remarks at a media briefing, she took a deep breath to gather herself and stared down at her notes. She spoke haltingly and said the disclosure came with "great sorrow, real pain."

"So any loss of life, especially given the unexpected, unprecedented nature of this event, is a tragedy," she said. But the loss of children was an even heavier burden.

Miami-Dade police later identified the children as 10-year-old Lucia Guara and 4-year-old Emma Guara. The remains of their father, Marcus Guara, 52, were pulled from the rubble Saturday and identified Monday. The girls and their mother, Anaely Rodriguez, 42, were recovered Wednesday.

Search crews going through the ruins found the remains of a total of six people Wednesday, bringing the number of confirmed dead to 18. It was the highest one-day toll since the building collapsed last Thursday into a heap of broken concrete. The number of residents unaccounted for stands at 145.

Earlier in the day, crews searching for survivors built a ramp that should allow the use of heavier equipment, potentially accelerating the removal of concrete that "could lead to incredibly good news events," the state fire marshal said.

Since the sudden collapse of the 12-story Champlain Towers South last week in Surfside, rescuers have been working to peel back layers of concrete on the pancaked building without disturbing the unstable pile of debris.

SEE ALSO: What we know about those missing, dead in the Miami-area condo collapse
EMBED More News Videos

Loved ones share stories of some of the people who remain missing at the site of the seaside Florida condo.

Miami-Dade Assistant Fire Chief Raide Jadallah told family members of those missing that the ramp allowed rescuers to use a crane on sections that were not previously accessible. He said that improves the chances of finding new pockets of space in the urgent search for survivors.

"We hope to start seeing some significant improvement in regards to the possibility of (finding) any voids that we cannot see," Jadallah said.