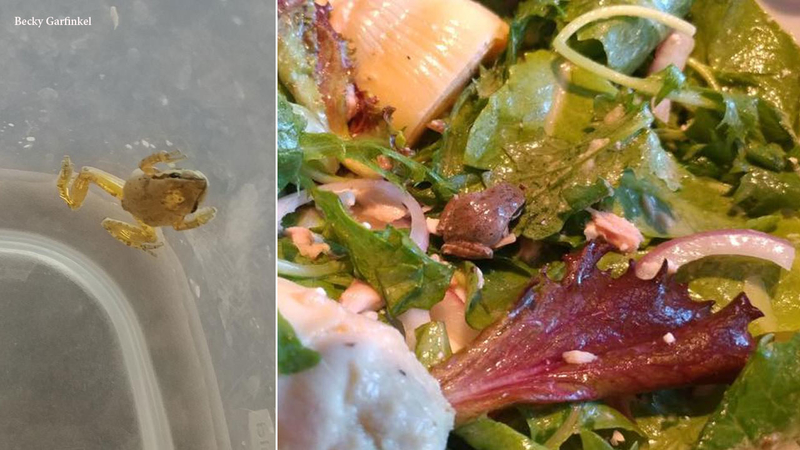 CORONA, Calif. (WPVI) -- A Corona woman has a new pet frog after finding the distressed animal in a large box of lettuce mix she had purchased from a local Target.

Becky Garfinkel said she had made her salad, poured on the dressing and was just about halfway through eating her meal when she saw something in her salad start to move.

"As I'm pulling to go stab another bite, I see a frog sitting in my salad plate after I've eaten almost the entire salad. Completely freaked out - screamed. I threw up afterward because I was traumatized. I'm a vegetarian and I couldn't believe there was a frog in there," she said.

The strict vegetarian quickly scooped the little frog out of the salad and rinsed off the dressing. Soon after, she said she noticed the frog was barely alive.

"(My husband) noticed that he was kind of not moving a lot and he rolled over. So he decides, let's do some chest compressions. With his finger - I'm not kidding you - barely pushes on the little frog and he breathes and turns around. I'm like OK. We have to keep him," she said.

She said the small animal came from a box of Taylor Farms baby spring salad mix that she purchased at her local Target store on Tuscany Street in Corona.

Garfinkel reached out to Target on Facebook about her find. The company responded and said it is looking into the issue and is contacting Taylor Farms. She said they also offered her a $5 gift card.

Garfinkel and her husband said they once had a lizard as a pet in an aquarium, so they are now using that old aquarium as a new home for the frog, who they named "Lucky."

"I will tell you right now, I have no desire to ever eat a salad again. I'm petrified of the thought of a salad," she said.

She said she's lucky her new pet wasn't eaten and survived a traumatic ordeal of being stuck in a salad mix and being tossed in a salad.