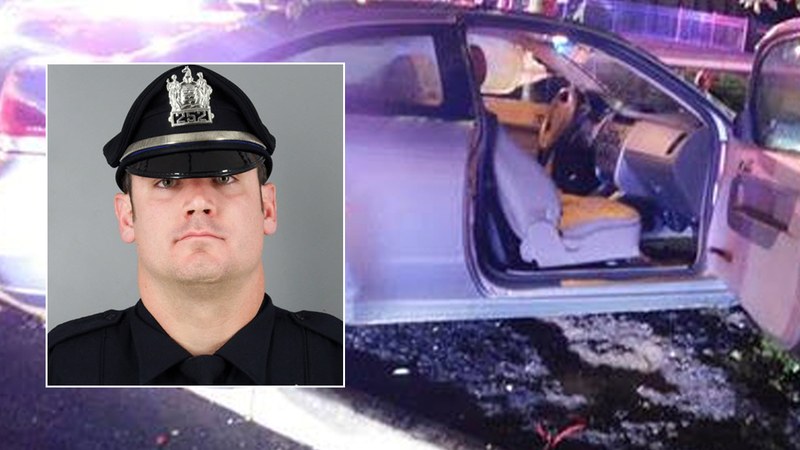 GLOUCESTER TOWNSHIP, New Jersey (WPVI) -- A Gloucester Township police officer was injured after he was dragged by a vehicle while trying to apprehend two teens on Wednesday night.

It happened around 11 p.m. near the Howard Johnson Hotel located at 832 N. Black Horse Pike.

"He observed a young male running from the hotel complex to the car that was parked in middle of the driveway with its lights off. The young male entered into the front passenger side of the car," said police in a news release.

That's when Officer Walsh approached the passenger's side door that was still open upon arrival to the scene.

RAW VIDEO: A Gloucester Township police officer was injured after he was dragged by a vehicle while trying to apprehend two teens on August 21, 2019.

Police say the car was off and two teens were inside the car.

"While Officer Walsh was speaking with the occupants, the driver suddenly started the car, put the car in reverse, and accelerated backwards," said police.

Officer Walsh was pinned in the open passenger-side door and dragged approximately 49 feet before the driver smashed into a tree. Officer Walsh's right foot was run over by the car.

Walsh was able to detain the two suspects.

A second officer injured his shoulder while removing one of the suspects out of the vehicle.

The second officer was treated and cleared for duty. Officer Walsh was transported to Cooper Hospital in Camden after suffering bruising, and injuries to his head, arm, ankle and knee.

Police say they found 5 ounces of marijuana, a distribution scale, and narcotics-related packaging materials inside the car.

"This incident is a clear reminder of how the men and women of the Gloucester Township Police Department display the greatest courage and work selflessly in protecting the community. Their efforts have resulted in a significant reduction in crime and that is only because of the actions like Officer Walsh who dedicate himself to protecting others," said Gloucester Township Police Chief Harry Earle.