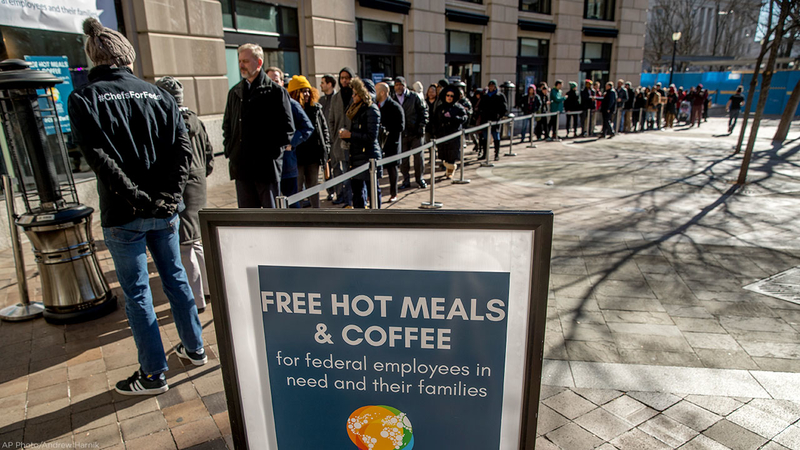 WASHINGTON -- After serving tens of thousands of meals to Washington-area government employees impacted by the government shutdown, celebrity chef Jose Andres is expanding his #ChefsForFeds emergency kitchen to feed federal workers going without a paycheck around the country.

Andres announced on Twitter Tuesday that #ChefsForFeds will soon be operating out of more than 30 different locations in 12 states and Puerto Rico in addition to the original location in Washington.

BIG news! In the next 48 hours #ChefsForFeds restaurants and food trucks are activating across the nation!! pic.twitter.com/AxVUGeUFex

The Washington kitchen, which has served thousands of meals a day in the week since it opened, is operated by World Central Kitchen, Andres' nonprofit that responds to natural disasters and works in communities around the world to end poverty and hunger. That organization is leading efforts to recruit restaurants, food trucks, catering services and volunteers for the #ChefsForFeds expansion.

They're expected to announce the additional locations and their hours this week.

In a video posted to Twitter last week, Andres called the partial government shutdown, which impacts hundreds of thousands of government employees across the country, a humanitarian crisis.

"I hope it will be a call to action to our senators and congressman and especially President Trump to make sure that we end this moment in the history of America where families are about to go hungry," Andres said in a second video. "We should always come together as we the people. As Americans...Republicans, Democrats, all Americans."

Big news! We will open a kitchen on Pennsylvania Ave this week to join private sector effort to feed federal employees during the shutdown. It’s only fair to feed Americans in need! #ChefsForFeds 👨‍🍳👩‍🍳🥘 Follow @WCKitchen for more details! pic.twitter.com/PRBtlaNug6

World Central Kitchen said the original Washington kitchen will be open "every day as long as there is need."

Before 2018, the federal government experienced more than a dozen prior shutdowns and funding gaps.