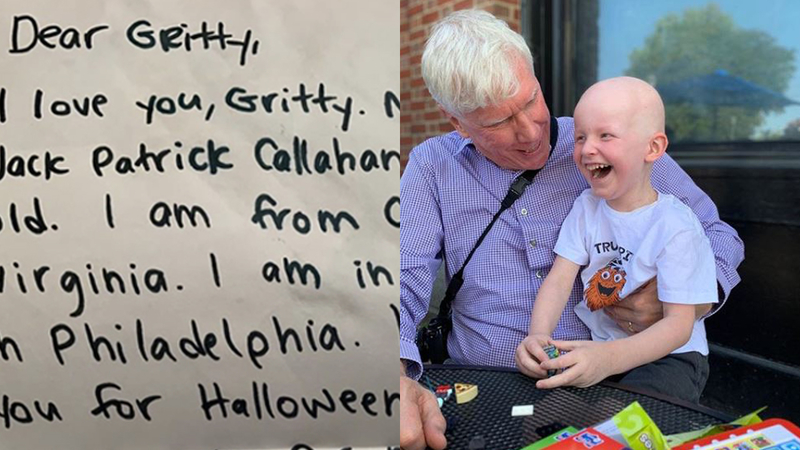 "Dear Gritty, I love you. My name is Jack Patrick Callahan. I am 3 years old. I am from Charlottesville, Virginia. I am in the hospital in Philadelphia. I want to be you for Halloween. I want a Gritty Cake for my birthday, too," read a letter to the Philadelphia Flyers mascot.

Jack's battle started in February when he was diagnosed with cancer in Charlottesville, Virginia. Doctors later recommended he get treated by doctors at Children's Hospital of Philadelphia, where he's been since June.

Ryan, who lives in Philadelphia, tells Action News he wanted to do something special for the 3-year-old boy who turns four on Oct. 30. So, he took Jack's letter--which was actually written for Jack by his father-- and posted it on Instagram. People started reaching out instantly.

"I did not expect this level of response," he says.

Ryan says three different bakeries have reached out to make Jack a cake, and many others have asked how they could help.

So far, the Flyers have not responded to Jack's request, but Ryan says he knows it's on their radar.

Gritty is currently on the road as the Flyers get ready to open their season in Prague on Friday.

Ryan says he just couldn't be more grateful for the brotherly love.

"So many people have reached out. It's heartwarming and reaffirms your thoughts about the good in people," he said.