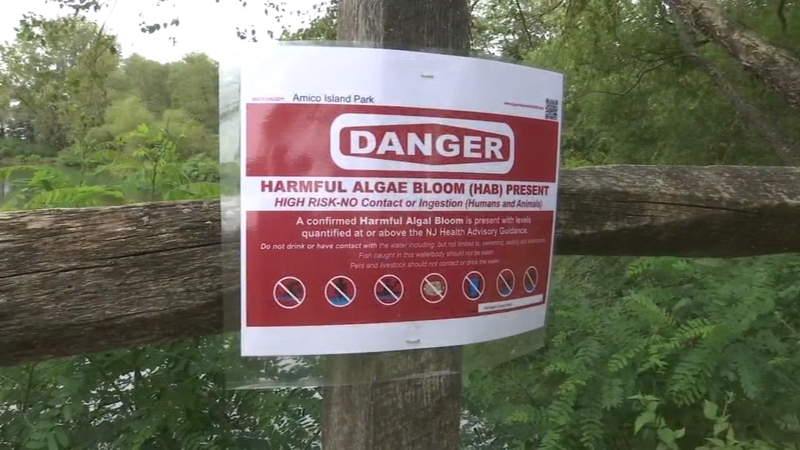 MOORESTOWN, N.J. (WPVI) -- A Burlington County pond has been closed to the public because of toxic algae in the water, and now officials want people to be on the lookout for the dangerous algae in other bodies of water.

So when the water started changing, Bob noticed.

"About a month ago it started going from a beautiful pristine color to a little bit of a green algae," said Gommel.

Burlington County officials say the harmful algae bloom was discovered Friday, thanks to a tip from the public. Tests confirmed the harmful levels on Tuesday, and signs went up around the pond.

Contact with the water can make people and animals sick, causing gastrointestinal or even neurological issues.

The harmful blooms occur when algae grows out of control, releasing toxins into the water.

Officials say a number of environmental factors cause algal blooms. They ask folks at any body of water to look out for anything unusual.

If you see something that looks like pea green soup layering out in the water it might be in small patches, that might be harmful algae," said Dr. Herb Conaway, director of the Burlington County Health Department.

This is one of several harmful algae blooms detected in Burlington County this summer. It's the reason Bob Gommel is very protective of his best friend, Blue.

"I let him in the river but not in the ponds," said Gommel.

County officials say regular testing will be done here and the public will be notified once the levels have returned to normal.