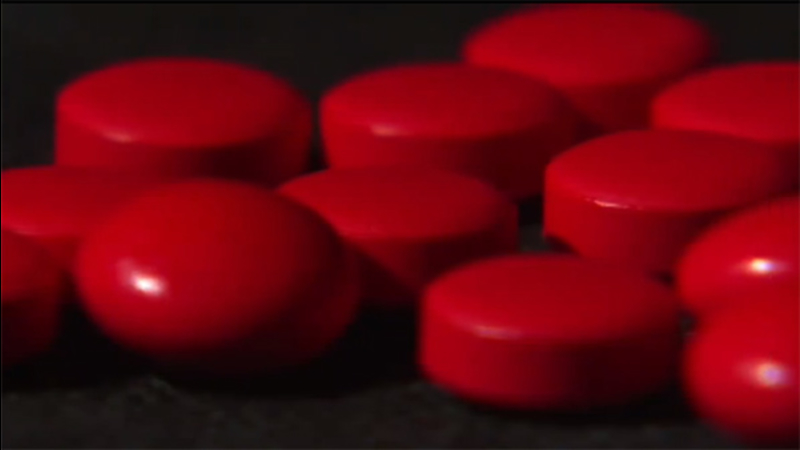 PHILADELPHIA (WPVI) -- There is a new and dangerous way teens are getting high.

It's called DXM or Triple C, and you won't believe how easy it is for your kids to get their hands on this highly addictive drug.

That's because it comes from cold medicines that can be found everywhere from the corner store to your medicine cabinet.

Taken in large doses, they mimic the hallucinogenic high of PCP. It's the newest drug captivating kids, that's been linked to some very dangerous and illicit behavior.

Others are downing dozens of pills of Coricidin, containing the same component, known to teens by the street name "Triple C." The videos show them acting wasted and sometimes violent.

"After the first time I did it, I just really loved it," said 18-year-old Shannon, who asked that we only use her first name.

She explains the high as an out-of-body experience, where users lose complete touch with the real world.

"I hallucinated a lot, it was like I was in a dream or something, I was so disassociated. So I liked that feeling of not being in reality, and I kept using it after that."

Addiction specialist David Rotenberg, the Executive Vice President of Treatment at Caron Treatment Centers, had a similar description, saying, "They will get euphoria, some will describe it as they are on an acid trip or liken it to a Special K type of buzz,"

Part of the ease, Rotenberg explains, is how accessible these over-the-counter drugs are for kids. Many of them shoplift bottles or raid their parent's medicine cabinet to get a quick fix.

"I would take it when I woke up in the morning, before school, during school, after school, before I went to sleep," said Shannon.

Bob and Rita, parents we talked to in Montgomery County, said that's exactly what happened to their son, before he started down a dark path.

"You could walk out the back yard and see the blister packs. He would just be taking multiple blister packs, just to get a high. He's be taking the liquid, the Robitussin to get high," Bob said.

"I was confused. I was kind of oblivious to everything," said Rita.

Rita and Bob said, at first, they missed the warning signs - not knowing a cold medicine could be so intoxicating and addictive.

It wasn't until their son overdosed and they checked him into a hospital that they realized his abuse of these over-the-counter drugs could have killed him.

They estimate he started abusing DXM at the age of 13. That's about the same time Shannon started using.

"I almost died, and that was kind of my wake-up call," she said.

But instead, Bob and Rita's son turned to other drugs like heroine, and ultimately a life of crime. When he couldn't get anything else, they say he went back to stealing DXM, which they described as a gateway to other addictions and behavior.

"It is a very, very dangerous drug, it has the effects of PCP. It changes your personality. It causes brain damage," said Rita.

And Rita and Bob believe the abuse turned their once straight-A son into another person, who lost any sense of reality.

"Part of the crime was [him thinking] 'I'm invincible,'" said Rita.

He is now in prison for 15 to 30 years after being convicted for his involvement in a violent crime.

"He lost his way, and he wound up committing a crime that has incarcerated him for many years," said Bob.

Bob and Rita did not want to be identified, but spoke only with Action News as a warning to other parents who, like them, may have never realized the dangers of something so seemingly safe.

"We feel blessed that our son is at least alive today, because some of his friends, unfortunately, are dead," said Bob.

Bob and Rita believe their son suffered brain damage from the long term and consistent abuse of DMX. They say only after months of incarceration did his brain clear of the drugs.

Some stores have placed drugs containing DMX behind the counter, or have a requirement that you be 18 to buy it.

Here is some more information on support groups and other programs:

There are several Philadelphia regional parent support groups. A full list can be found here: http://www.caron.org/alumni/support-groups/parent-family.

The one directly in Philadelphia is here: http://www.caron.org/alumni/support-groups/parent-family/philadelphia-pa.