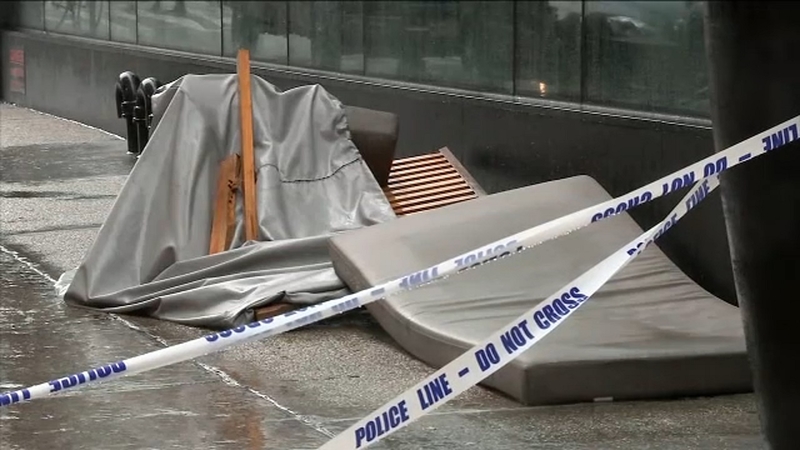 UNION SQUARE, Manhattan -- Strong winds during a rainstorm Saturday rattled scaffolding and turned the furniture into projectiles hitting a woman and damaging a car in Manhattan.

The woman, 23, was walking past a 12-story building on 15 Union Square West when winds blew a wooden patio chair off of a balcony, hit her in the head and damaged the car next to her.

Witnesses say it sounded like a truck hit the floor.

"It just went like whack! You know, like something really strong hit. Like a big snap," said Patrice Demay. "Then, all of a sudden, people started running."

At first, witnesses did not see the woman lying on the ground because she was knocked unconscious.

"She was passed out, and then people thought she was dead," said Terry Williams. "Then all of a sudden she started screaming like she woke up and she was in a panic."

Police say the woman was unable to walk and was bleeding from her head. She was rushed to Bellevue Hospital and is expected to survive.

Meanwhile, around the same time, police were called to the scene a 31-story apartment building, to investigate reports of a broken window.

Authorities determined that a suspended scaffold rig was not properly secured, and a rope for the rig broke a window on the 15th floor of the building.

The scaffold was in place for masonry repair, but no work was ongoing at the time.

The scaffold has since been lowered to the third floor and secured.

No injuries were reported, and the Department of Buildings has issued a violation to the contractor for failure to safeguard the construction site and a Full Stop Work Order for all work at the building.
Report a correction or typo
Related topics:
union citynew york citymanhattanwindfurniturewoman injuredscaffolding
Copyright © 2021 WABC-TV. All Rights Reserved.
TOP STORIES
Simmons tells 76ers he's not mentally ready to play: Sources
Baldwin: 'My heart is broken' after accidental film set shooting
Prop guns: What they are and how they can kill
Peter Scolari, 'Bosom Buddies' and 'Newhart' star, dies at 66
Eagles-Raiders Preview: Jaworski's game prediction, players to watch
Bus driver shortage could lead to virtual learning at Del. district
Local reaction to Moderna, J&J boosters getting green light
Show More
Brandon Lee's family speaks out after fatal shooting on movie set
Laundrie family attorney speaks out after discovery of Brian's remains
Officials release cause of family's mysterious death on hiking trail
Lawsuit: FedEx reselling trucks and not disclosing true mileage
Violent Thursday leaves 3 dead, 4 injured in Philadelphia
More TOP STORIES News