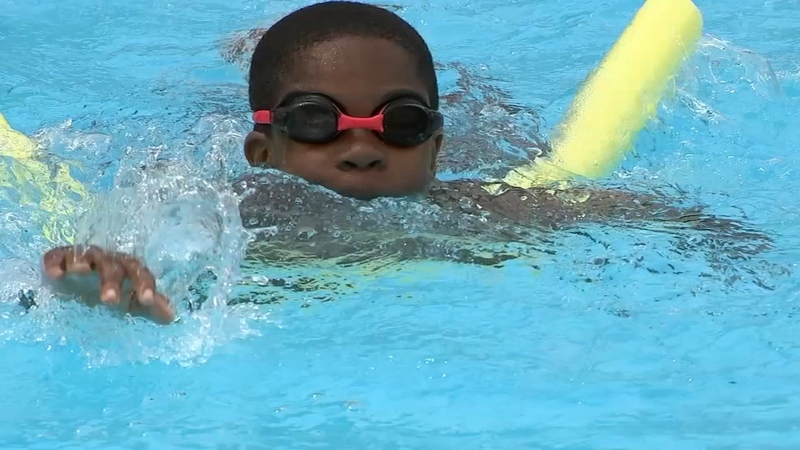 YEADON, Pennsylvania (WPVI) -- As 6-year-old Alina Brinson stood with her tiny toes hanging off the edge of the diving board, there was one word to describe how she looked: terrified.

But Brinson knew that she needed to jump into the eleven feet of clear blue water. That's because she's one of the kids enrolled in a program called 'No Child will Drown in Our Town' created by the Nile Swim Club in Yeadon, Delaware County.

The free program was created four years ago as board members discussed that so many children in their community were unable to swim.

It's a problem that particularly impacts children of color.

According to one study from the Centers for Disease Control, Black children ages 5-19 die at a rate that's 5.5 times higher than white children.

"Swimming in our community is very challenging, to say the least," said Patterson. "Every now and then, you have a child who thinks they can swim. They jump in 11 feet of water and then quickly realize that they're not able to swim."

That's why board members of the nonprofit pool started the free program four years ago. To date, they've taught about 600 children how to swim in a 10-day program that happens from 9 a.m. to 12 p.m. Monday through Friday.

"You don't even have to be a member," said Patterson. "You just have to sign up come to the pool, and we will teach your children how to swim for free."

Nile Swim Club board members feel like the program is part of what the pool's founders would have wanted.

Three African-American families created Nile Swim Club in 1958 after being denied membership to another private pool. The club is now the oldest historically Black-owned pool in the country.

A historic marker at the entrance of the pool details its rich history.

"This pool is for everyone," said Patterson. "It's not Black or white, wealthy or not wealthy. It's about our community and making sure our children know how to swim."

Brinson wants to add her name to that list of children who know how to swim. After hesitating for a few minutes, she eventually leaped into the deep end as a lifeguard waited to catch her and help her swim to the pool steps.

As she climbed out, her previously terrified look had been replaced by a smile.

"You want to do it again?" asked aquatics director Andre' Kenneth Andrews.

Alina could only laugh and answer with one word: "Yeah!"