"Our law enforcement, they are not able to chase these vehicles, safely, in any safe manner."
WPVI
By Walter Perez 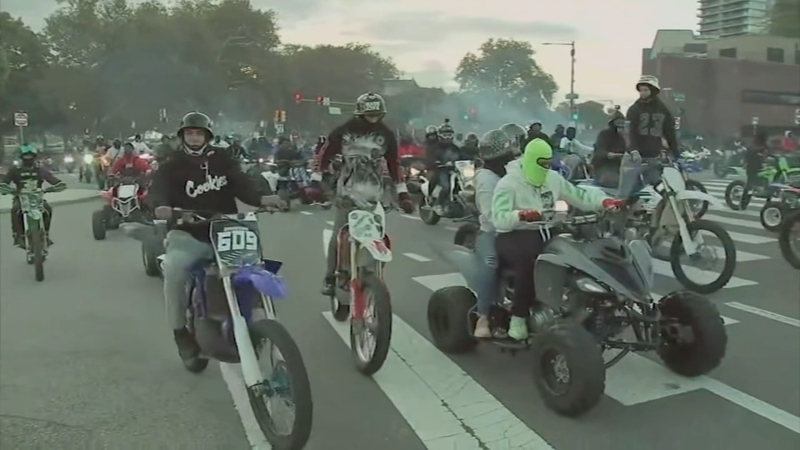 Lawmakers aim to stop use of ATVs, dirt bikes on city streets

PHILADELPHIA (WPVI) -- As summer approaches, illegal ATVs and dirt bikes continue to be a problem on city streets, but Philadelphia is not alone in dealing with the issue.

Lawmakers from across Pennsylvania are now working to come up with better ways to crack down on the illegal riders.

Pennsylvania State Representative Joanna McClinton said Wednesday that something must be done.

"They are unregulated. There's no way to inspect them. There's not a special licensing for them, and we get inundated with the danger that comes along with those activities," she said.

Activities that involve scenes where dozens, sometimes more than 100, of people ride the illegal vehicles through the streets of Philadelphia.

In many cases caught on video, the driver ignores stop signs and traffic lights, putting commuters and pedestrians at risk.

"They crash into each other, let alone crash into somebody else just walking along... and when you are riding along with no protection, no helmet, you can get seriously injured," he said.


On Tuesday night, lawmakers and law enforcement officials from across the state gathered in Allentown to discuss this issue.

While nothing solid was agreed upon, the general consensus was to develop a state-wide policy that both develops some kind of licensing and registration system and designates more locations where ATV and dirt bike riders can legally operate those vehicles.

McClinton said the goal has to be a system that discourages this kind of behavior, which puts police in a very difficult situation.

"Our law enforcement, they are not able to chase these vehicles, safely, in any safe manner. So, it becomes a danger on top of a danger because all of us pedestrians walking by are in danger and certainly when a chase ensues, more people are in danger," she said.