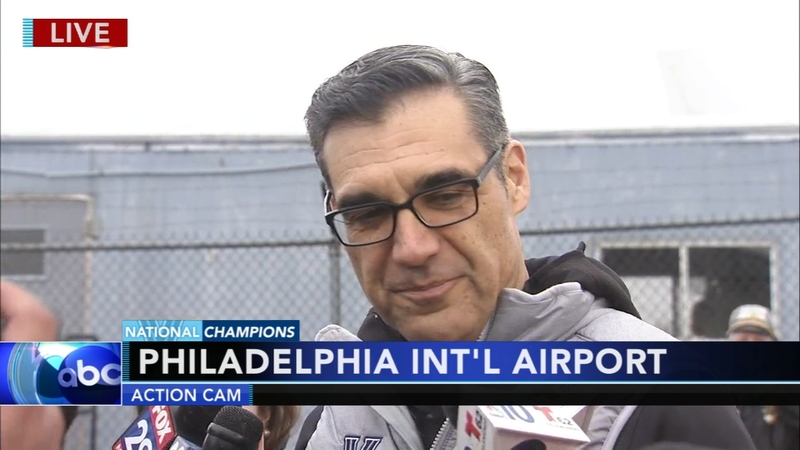 PHILADELPHIA (WPVI) -- Not all too long ago, Jay Wright was still one of those many standout coaches without a national championship despite repeated winning seasons and appearances in the NCAA Tournament.

Less than two years and a Texas two-step of titles later, the sharp-dressed Villanova coach is now in very select company.

With the Wildcats' 79-62 win over Michigan in the Alamodome on Monday night, Wright joined Duke's Mike Krzyzewski and North Carolina's Roy Williams as the only active coaches with multiple NCAA titles.

"Wow ... I certainly do not, I'll tell you honestly, count myself in that category," Wright said. "I still like looking up to them. I do. I enjoy it better that way."

Like it not, a lot of coaches are now looking up to Wright. He is only the 14th coach overall with more than one championship, a list topped by John Wooden's 10 at UCLA.

Villanova waited 31 years to win another championship after getting its first with coach Rollie Massimino in 1985. Wright and the Wildcats didn't have to wait very long at all to add to that total.

Only two days shy of the second anniversary of the title they won about 200 miles away in Houston when Kris Jenkins made a buzzer-beating 3-pointer against North Carolina, they were cutting down the nets again.

"This is one is really fulfilling, really humbling. The first one was overwhelming because you just never did it before and he hits a shot at the buzzer," Wright said. "And everything that happened after, the confetti comes down, you never did. The confetti came down this time, I was like all right, I knew it was coming, you know. But you just get to enjoy everything."

The Wildcats wrapped up Wright's 17th season with 36 wins, a school record. It was his 422nd win at Villanova after 122 wins and back-to-back NCAA Tournaments in the last of his seven seasons at Hofstra.

Sophomore guard Donte DiVincenzo said Wright's strength is he doesn't coach everyone the same way, and instead conforms his coaching style to what best fits the player.

"Never takes his foot off the gas. Never thinks just because we had a 30-win season the next year's going to be just as good," DiVincenzo said after scoring 31 points in the championship game and being named Final Four MVP. "Whenever that happens we go back to work. We never want to stay on top of the mountain, we call it. We want to go up on top of the mountain, we get up there and we go back down and climb the big one."

Junior guard Phil Booth said Wright certainly deserves to be "up there with the best of the best" like Coach K (five titles) and Williams (three).

"He's a very humble dude. He pushes us so much. He's all about us," Booth said. "People always talk about him as a coach, but people don't know how off the court how he genuinely cares about all of us and he's always for all of us."

After making it to the Final Four in 2009, the Wildcats had a six-season span when they made the NCAA Tournament five times and never got past the first weekend.

That changed with their title run in 2016, before another loss in their second tournament game last season.

Then in this wild NCAA Tournament with AP Player of the Year Jalen Brunson and DiVencenzo's big outburst in the finale, the Wildcats were never challenged late. They won all six of their tournament games by double figures.

"It's very humbling to know that we've been able to do this. ... Our goal is never to win a national championship," he said. "Our goal is just to be the best team we can be by the end of the year. We judge ourselves differently. When we get knocked out in the second round, we were disappointed that we lost, but we weren't disappointed in our effort.