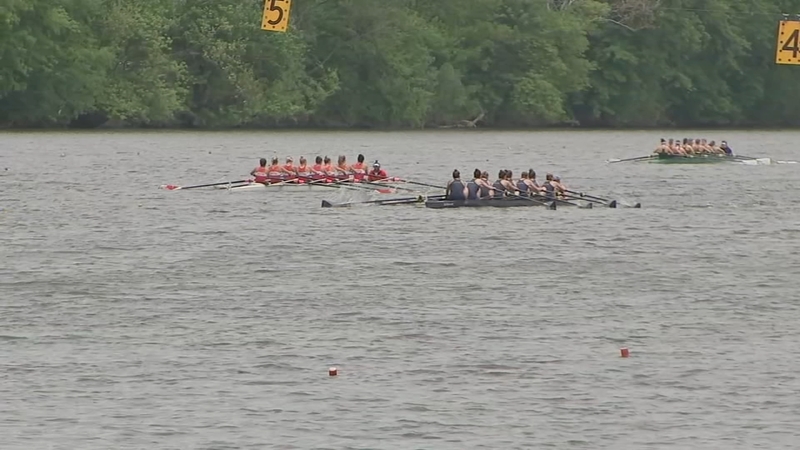 PHILADELPHIA (WPVI) -- Jennifer Dougherty, like many mothers, cheered her family on as the 2022 Jefferson Dad Regatta kicked off in Philadelphia.

One of the teams was St. Jospeh's University, where her son is a member of the crew team.

But cheering him on last year presented a unique challenge.

"We hid in the woods to watch our son row," she laughed while recalling the 2021 Jefferson Dad Vail Regatta, which is the largest collegiate regatta in the country.

It took place last year without spectators due to COVID-19 precautions.

The previous year, in 2020, the event was canceled altogether.

"It was extremely hard on them," said Kathy Isola, whose son is a member of the LaSalle University rowing team. "They came home from spring break thinking they were going back, and they didn't."

The Jefferson Dad Vail Regatta hasn't happened normally with athletes and a cheering crowd since 2019.

The event made its official comeback Friday, welcoming crew teams and the crowds that traveled to cheer them on.

Organizers spread the word that the public is once again invited to attend Friday and Saturday scheduled races.

It's how many people remember spending their days participating in the Philadelphia tradition.

"This is a premier social event and a premiere athletic event for Philadelphia. And we all have a history of coming down here from college," said Rob Dougherty, who attended Friday's races with his wife, Jennifer, as they cheered on their son.

"There's over 1,500 kids," said Hanna. "They come here and love to meet one another and compete. And they're competing for a gold medal."

Jefferson University Rowing head coach Chris O'Brien said, "They train all year long. They train nine to 10 months out of the year for a chance to race at this."

But not every team made it back to the regatta. Some rowing programs were permanently affected by the pandemic.

"We don't have as many California crews this year or Canadian crews," said Hanna. "A lot of programs disbanded. They couldn't afford to keep up all their sports programs. And crew was a casualty of COVID."

Still-- more than 200 volunteers helped make the return of the Jefferson Dad Vail Regatta possible. It's free for spectators to attend the event, which Hanna says is like none other.

The Jefferson Dad Vail Regatta hasn't happened normally with athletes and a cheering crowd in Philadelphia since 2019.