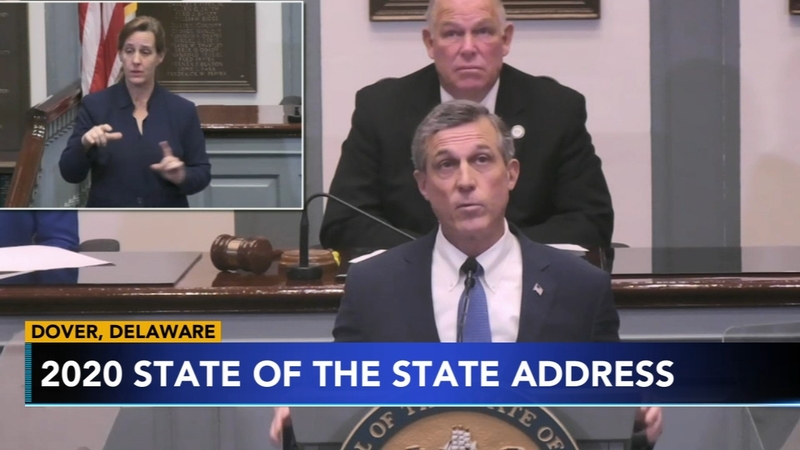 In his State of the State address Thursday, Carney called for investing $50 million in taxpayer money in economic development initiatives, including new programs to build lab space to help emerging companies grow, and to quickly convert properties to meet the needs of prospective employers.

"With a strong economy, it's the right time for us to invest in our future," said Carney, adding that more Delawareans are working now than at any other point in the state's history.

Carney's spending proposal comes as state officials have seen revenue projections increase recently by some $200 million over a two-year period.

The $50 million for capital investments to boost Delaware's economy is in addition to $50 million that Carney proposed earlier this week for clean-water initiatives, and $50 million more in state funds to build one new school in Wilmington and renovate another.

Despite the new spending proposals, Carney said the budget plan he will unveil next week will limit spending to "sustainable levels" and dedicate one-time revenue for one-time infrastructure projects.

Carney devoted a significant amount of time in his speech to touting economic development efforts as he looked back at his three years as governor.

"I liked it because he spent as much time talking about the things we have done in the last year or so, as well as where we want to go in the future," said Democratic House Speaker Pete Schwartzkopf.

Republican House Minority Leader said the speech was a good retrospective view of Carney's first term, but that many details of Carney's spending proposals need to be worked out.

"It's a campaign year," Short said, noting that Carney is up for re-election this year.

Short said lawmakers will have a better perspective on Carney's plans for the future when he releases his recommended budget.

"The meat of the subject and the real work starts next week," he said.

Meanwhile, Carney on Thursday urged lawmakers to work with him to enact more gun control measures, protect the environment and improve public schools.

He also proposed waiving tuition and fees at the University of Delaware, Delaware State University and Delaware Technical and Community College for students who age out of foster care.

Carney also voiced his support for legislation to create a healthcare provider loan repayment program of up to $50,000 annually for four years for new primary care providers paying off medical school debt.

"We want to attract some of the best and brightest young doctors to areas where they're needed the most," he said.

Carney's environmental priorities include the clean water initiative and sprucing up Delaware's landscape.

"We have a litter problem in Delaware. And I'm determined to stop it," he said, noting that almost 50,000 bags of trash have been picked up under a partnership between the state and Goodwill Industries that pays people to pick up litter.

Carney also said he wants to see a million trees planted across Delaware over the next decade, and 40 percent of Delaware's energy to come from renewable sources by 2035.

"As I start my fourth year as your governor, and compare things now to how they were when I took office, things are really looking up," said Carney, who described the state of the state as "strong and getting stronger."