Accompanied by his attorney, he went from there to the 15th police district to face aggravated assault and other related charges for a baton strike on a protester along the Ben Franklin Parkway last week.

"He never ever even came close to the head, it was shoulder strike, it's what we are trained to do. The proper procedures were followed. Our guidelines were followed," he said.

An attorney for the Temple student who was struck tells Action News his client received 10 staple to close a gash on the back of his head.

The attorney said the client, Evan Gorski, would have no comment.

McNesby could not explain the alleged gash to the back of Gorski's head.

"That's something you'd have to ask him, I don't know how he got those staples. He sure as hell didn't get them from Joe Bologna."

"Inspector Bologna and his fellow officers were spit on, sprayed with urine and other chemicals as well as verbally and physically assaulted. His use of force to apprehend an individual, who was trying to thwart a lawful arrest during a melee, was lawful and justified."

McNesby detailed Bologna's emotions as he turned himself to face charges. 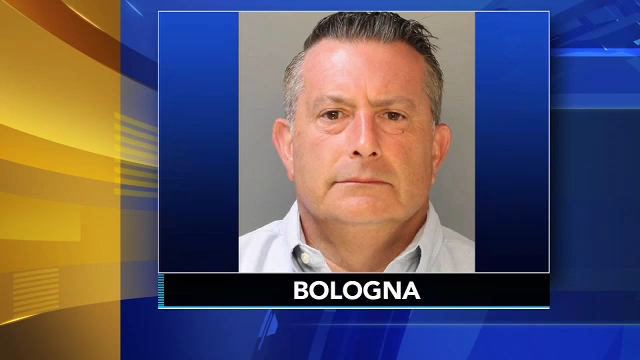 "He is hurt. He gave his all for the city, 30 some years. He was the go-to guy that they called on, every commissioner," McNesby said.

Several troubling videos have emerged of Bologna apparently in confrontations with protesters including one recorded by Danilo Lavia.

Supporters of Bologna say he has been beloved in the communities he served, including the 19th district of West Philadelphia. In 2016, the then-captain led a unity service after police officers across the country were gunned down.

This was part of his message:

"We want to mourn all, but come together as a community. And continue to build trust as we've been doing, especially in this district, over the last four-plus years," Bologna said in the 2016 interview.

"He was the guy they leaned on to move forward to keep the community safe, the businesses safe," McNesby said.

Bologna has been suspended for 30 days with intent to dismiss.

Sources tell Action News Police Commissioner Danielle Outlaw was unaware Bologna would be charged until just before the charges were filed.

Officials with Temple University have responded to claims of a police assault on a student during a protest in Philadelphia last week.