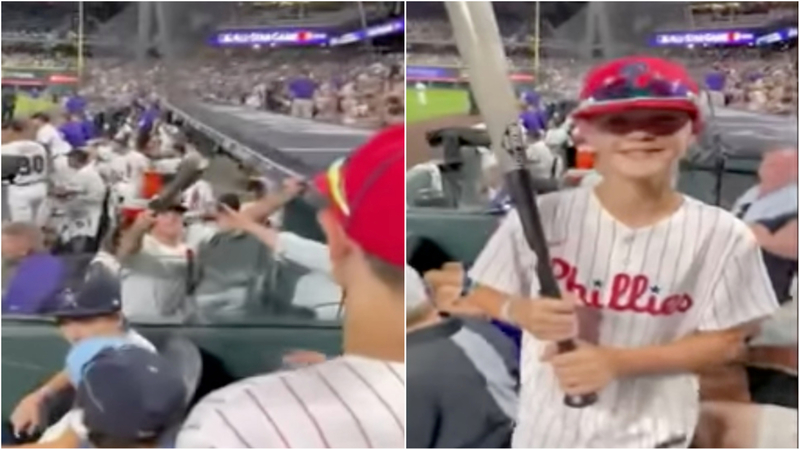 DENVER, Colorado (WPVI) -- What's better than going to the MLB All-Star Game in Denver and seeing your home team slugger hit a homer? How about getting a signed baseball bat, too?

Twelve-year-old Matthew Borden and his father Larry, of Lower Merion Township, got quite a surprise when Philadelphia Phillies catcher J.T. Realmuto called the two over to hand them a signed baseball bat at Coors Field in Colorado.

"I saw J.T. in the dugout and then he comes over and does like 'one second,'" Matthew told 6abc's Jamie Apody, while holding up his index fingers as Realmuto did. "(He) goes in the clubhouse, gets a Sharpie and a bat, and signs the bat and gives it to me."

You think you can’t love @JTRealmuto any more than you already do? Check this out, as he gave his HR bat from last nights @AllStarGame to a young @Phillies fan. I’ll have that story coming up on @6abc pic.twitter.com/cJoiFdvS3z

And what was the 12-year-old's reaction?

"I couldn't speak or anything," Matthew recalled.

His father and the All-Star crowd were in shock.

"Everybody around couldn't believe it. It was a total class act to do what he did -- change this kid's life that's for sure," said Matthew's father.

The American League did beat the National League 5-2 Tuesday night, but it was a historic night for Realmuto. His homer off Gregory Soto during the 5th inning is something no Phillie has done since Mike Schmidt in 1981.

Matthew and his father say they will cherish this moment forever.