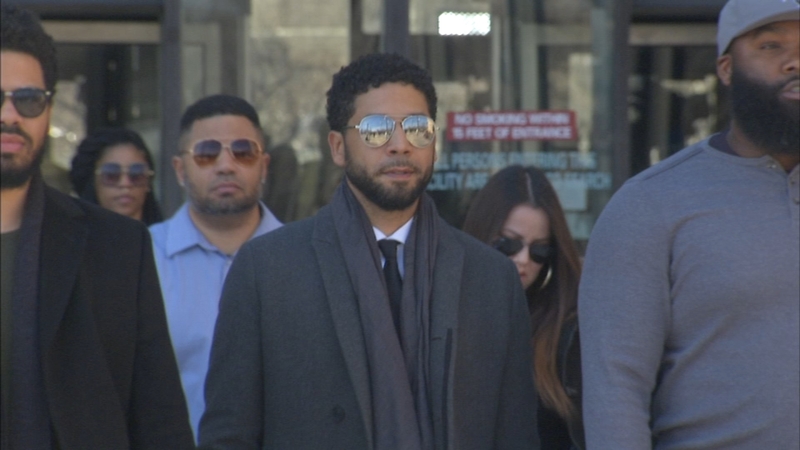 CHICAGO -- Actor Jussie Smollett walked back into court in Chicago Tuesday morning, days after he was charged with 16 felony counts related to that alleged hoax.

RAW VIDEO: Watch as Jussie Smollett arrives for a hearing at the Leighton Criminal Courts Building in Chicago.

The judge ruled to allow cameras in the courtroom during Thursday's court hearing. After the case is assigned to a judge, that judge will rule on whether cameras can be in the court for future proceedings.

Jussie Smollett left court in Chicago without comment after the judge ruled to allow cameras in the courtroom during Thursday's hearing.

"There has been a lot of misinformation in this case that has been presented as fact and evidence against Mr. Smollett, which is demonstratively false. We welcome cameras in the courtroom so that the public and the media can see the actual evidence and what we see as the actual lack of evidence against Mr. Smollett and we look forward to complete transparency and the truth coming out," said Tina Glandian, attorney for Smollett, after the hearing at the Leighton Criminal Courthouse.

The "Empire" actor will return to court on Thursday when he is expected to enter a formal plea on 16 counts of disorderly conduct for allegedly filing a false police report.

The TV actor claimed he was the victim of a vicious hate crime in the Streeterville neighborhood in January, but police said it was a hoax and that Smollett hired two brothers to carry out the fake attack.

Attorney Gloria Schmidt told Good Morning America in an interview Monday morning that Smollett was "in a position of trust" with the Osundairo brothers.

"They worked with Jussie, they had known him, they were friends with him," Schmidt said. "This was someone who the brothers thought could help their career. Obviously, Mr. Smollett has connections, he had a good position with Fox, so this was someone that they had trusted to consider their best interests."

Schmidt said that the brothers have evidence to back up their claims.

"That's why when they went from persons of interest to suspects, they are free men and they are at home," she said.

Smollett was originally charged with one felony count of disorderly conduct for filing a false police report by the Cook County State's Attorney's Office on Feb. 20.
The TV actor claimed he was the victim of a vicious hate crime in the Streeterville neighborhood on Jan. 29. He said two men physically attacked him while yelling racist and homophobic slurs, threw a chemical liquid on him and looped a rope around his neck.

The grand jury returned two separate sets of charges, one of each lie Smollett allegedly told. The first set are related to what Smollett told officers about the alleged attack, including that the attackers called him racial and homophobic slurs, struck him with their hands, put a noose around his neck, and poured some sort of chemical substance on him.

The second set of charges are related to the second interview Smollett had with police about the alleged attack later that day, saying the men attacked him from behind and he fell to the ground, at which point the men continued kicking him. Smollett also told police on this occasion that one of his attackers was white.

The two sets of charges correspond to two sets of police officers Smollett allegedly lied to.

A charge of felony disorderly conduct for filing a false police report carries a possible sentence of probation to three years. Smollett already pleaded not guilty to the first disorderly conduct charge. He was taken into custody and posted $100,000 bond to be freed.

Two days after the alleged attack, Chicago police released surveillance images of two people they said they considered persons of interest in the attack.

But the investigation turned on Smollett. He's now accused of allegedly orchestrating the attack with the Osundairo brothers, who he knew. One brother was an extra on "Empire" and the other was Smollett's personal trainer.

Prosecutors said Smollett paid the Osundairo brothers to pull off the staged attack.

Smollett had also reported a threatening letter sent to him on the "Empire" set containing a white powder, a week before the alleged attack. The letter is currently in the FBI crime lab for analysis, sources said, and experts believe Smollett could face federal charges for allegedly sending the letter.

Chicago Police Superintendent Eddie Johnson said the actor initially faked a letter using racist and homophobic language. When that didn't get attention, Johnson said, Smollett paid two brothers $3,500 via personal check to stage the attack, because he was "dissatisfied with his salary."

"The fact of an indictment is not unexpected. We knew that there is no way they would expose their evidence to a public airing and subject their witnesses to cross-examination.

What is unexpected however, is the prosecutorial overkill in charging 16 separate counts against Jussie. This redundant and vindictive indictment is nothing more than a desperate attempt to make headlines in order to distract from the internal investigation launched to investigate the outrageous leaking of false information by the Chicago Police Department and the shameless and illegal invasion of Jussie's privacy in tampering with his medical records.