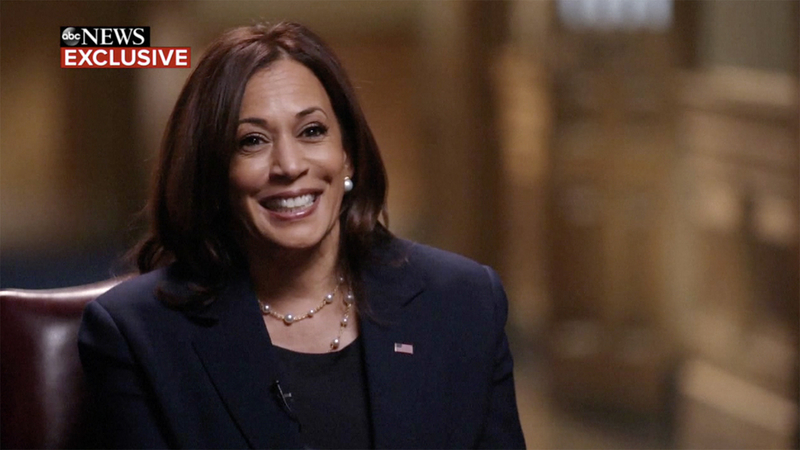 WASHINGTON -- Vice President-elect Kamala Harris said lawmakers need to stop "living in a bubble" when it comes to COVID-19 stimulus talks and said she feels "a very big sense of responsibility" in assuming her new role.

Harris spoke exclusively to "Good Morning America's" Robin Roberts at her alma mater Howard University a little over a month before her inauguration.

When she's sworn into office on Jan. 20, she'll be the first woman, as well as the first woman of color, in U.S. history to assume the position of vice president, but following a contentious election season and amid a raging pandemic, bringing the country together remains a major challenge.

When asked about the president's reluctance to accept his defeat, Harris pointed to its impact on American democracy.

"The Electoral College spoke to a very important principle in our country and in this democracy of ours as Americans, which is, our democracy is stronger than any one man or woman. It is about the people," she said.

Many Americans are looking to lawmakers to pass much-needed COVID-19 stimulus relief.

This week, the official coronavirus death toll reached 300,000 in the U.S. while millions of Americans continue to claim unemployment and businesses struggle to stay afloat.

Still, congressional leaders have dragged on COVID-19 stimulus talks for months, and Harris said she doesn't "understand the hesitation."

"The moratoriums on evictions and foreclosures are about to end. The extension that people need for benefits is very real. And the people here in Washington, D.C., have got to stop living in a bubble," she said.

"The people have a right to expect that their leaders in Congress see them, and act in their best interest."

Earlier in the month, Biden said that he will ask Americans to commit to 100 days of wearing masks as one of his first acts as president. Harris said this will be a request -- not a mandate -- but she hopes Americans will follow through to see the outcomes.

But as the pandemic continues, many Americans, including some politicians, have grown fatigued with restrictions, even as the death toll from the virus surpassed 300,000 in the U.S.

"When you see leaders on both sides when it comes to the pandemic, they will put down strict guidelines. And even your colleague in California, strict guidelines, but yet they don't follow through. What kind of message does that send to the American public?" Roberts pressed.

"I think we all have to understand that right now, this is a moment for everyone to sacrifice. And-- if we're gonna get through this together as a country, then we all have to do it," Harris replied.

As she prepares to break barriers on Inauguration Day, Harris said she hopes it "says to everyone, 'Don't let anyone put you in a box.'"

RELATED: How to pronounce Kamala Harris' name and what it means

But Harris will not be the only person making history on Jan. 20 -- her husband, Doug Emhoff, will also take the unprecedented role of the first "second gentleman."

"He's aware that you know, we still have so much work to do to remind our children of every gender that they should not be confined by the limited perception that some might have of who they are and what they can be," Harris said of his role.
As she prepares to take the oath of office, Harris was asked how she would judge her history-making tenure as vice president.

"In four years from now, if you were to look back as your role as vice president. What will be your definition of success? Roberts asked.

"Joe and I were elected to do a job, which is to build back better and to fight for the best of who we are as a nation. And he and I as partners, if we are able to do that together, I think our country will be the better for it," Harris added.