Hockey player breaks barriers through hard work on, off the ice | Our America: Fifty50

Watch "Our America: Fifty50" on your local ABC station or wherever you stream: Fire TV, Android TV, Apple TV and Roku
WPVI
By TaRhonda Thomas 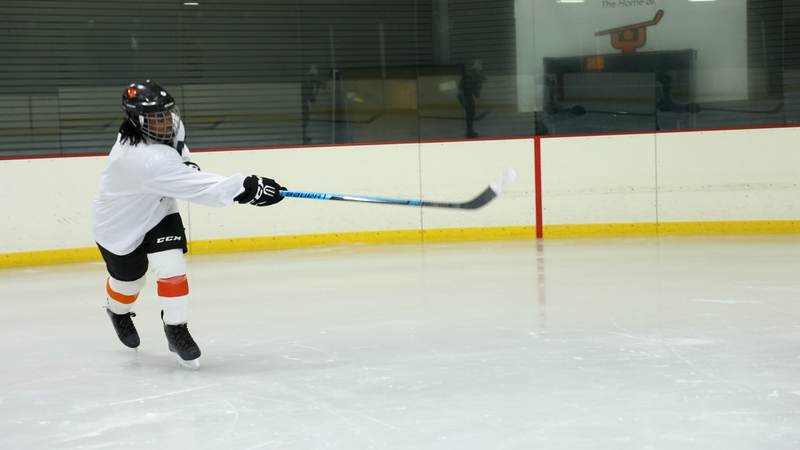 Hockey player breaks barriers through hard work on, off the ice

PHILADELPHIA -- Kareyna Baylor's days start early. She's usually up by 6:15 a.m., but her early mornings feel even earlier if she's had a late night the day before.

Sometimes she stays up until 1:30 a.m. All of those hours are filled with activities that have put her at the top of her game in school and in a sport where there aren't many young Black women: hockey.

"Being a female. Playing hockey itself. Being Black. It's all mental challenges," said the 18-year-old Philadelphia native.

She's gotten a lot of attention for her abilities on the ice, but Kareyna herself admittedly didn't know much about the sport as a kid.

"[I'd] never seen a hockey video before. Never did anything with hockey," she said.

That all changed when the Ed Snider Youth Hockey Foundation hosted a gym class takeover at Kareyna's elementary school.

"Her first day did not go very well," said Casey Kilduff, senior coordinator of Girls Hockey Programs with the Snider Foundation. "She fell and had a little bit of an injury."

"I sprained my ankle after 15 minutes and had no intention of going back whatsoever," said Kareyna. "The coach was persuading me like, 'Come on, come back. If you fall, get back up and keep trying.'"

With coaches encouraging her, Kareyna went back on the ice, and she flourished.

"She started playing," her dad said, "and she was good! It's like looking at your child and saying, 'Hold up, is this really going on?' But she was good. She was playing and scoring and [passing]. I said, 'Wow!'"

Kareyna's skills drew attention from parents, players, coaches and fans alike. She's now the team captain and playing a mixture of forward, center and right wing. Hockey allows her to show her strength.

"I love when we get close to scoring on a goalie and the other team wants to get in our face. I enjoy the tension," she said, "because now that you want to bring the tension and I can't actually fight, I'm going to give you my power through my skill."

Oftentimes, Kareyna is the only African American player on the ice. It's something that she says she had to get over mentally but, overall, both she and her parents have had a great experience in hockey.

"Our experience as Black parents -- we always felt welcome," said Kareem Baylor. "We felt odd because we [stuck out like a] a sore thumb. But as far as the welcoming thing [...] it was no racism."

That left Kareyna free to focus on hockey, her school and her work. The teen's 6 a.m. wake-up call is followed by an 75-minute commute to school via bus and trolley. Sometimes that's preceded by hockey practice.

When she's done with a full day of school, Kareyna usually goes to work at a local restaurant.

"Recently I've been working 4-11 to get enough money for prom," she said. "I'm always tired but it keeps me pushing because it's for a reason."

Her commitment has paid off, as Kareyna got an offer for a full-ride scholarship to Villanova University. And it's not the type of scholarship some would assume the hockey-playing phenom would get.

"[It's a] full academic scholarship," Kareyna said proudly, adding that she plans to play on Villanova's club hockey team.

It's an achievement that her father, who works as a roofer, never could have imagined as he installed a roof on the Villanova Law School.

"As a roofer, I'm thinking, 'How long will I have to be on this roof to help pay for education?'" he said. "When she got that notice about having the Villanova scholarship...[I was] out of my mind!"

Kareyna, on the other hand, took it all in stride. It's a virtue she learned as part of her Muslim faith.

"I just try to stay modest," she said. "Modest and humble. It's probably the number one thing I live by."

Through it all, her mother and father have been there to encourage her.

"Knowing that they do everything for me and my little brother keeps me pushing," she said. "I love them so much."

Her father echoes the same sentiment, marveling at the achievements of his daughter.

"That's my best friend," he said. "My children, they're number one, and I live for them."

He plans to take the short ride to Villanova often to visit his daughter and watch her play hockey. It's a new journey Kareyna can't wait to begin.

"I feel like my future is what it is now, but bigger," she said. "Hockey is definitely in my future... I would love to go further than college: NWHL [now known as Premier Hockey Federation], USA Hockey. Sports is really just my life!"